JUST 12 months after winning the club’s second ever senior championship, Ederney have one hour to save their senior status.

After drawing last year’s runners-up Derrygonnelly in the quarter-final, one of them was going to find themselves in the relegation mire.

It took a replay and extra-time to separate them, with Ederney losing their grip on the New York Cup and tossed into the scrap for survival.

Speaking on his way to training this week, former Fermanagh stalwart and All-Star midfielder Marty McGrath insists they were beaten ‘fair and square’ at the hands of Derrygonnelly, while lamenting over a combination of missed chances and running out of legs.

Then, last weekend, they fell to Roslea – 1-10 to 1-8 – in the relegation semi-final. Now, they enter the last chance saloon.

“When you lose a championship at any time, it is hard to lift it for the following week,” said McGrath.

“It left it that you had to get the mind set in a very quick space of time. Unfortunately, Roslea jumped on it and took full advantage of it.”

Manager Mickey Cassidy was awaiting the physio report on some of their ‘niggles’.

“We are a small club with small numbers and you need everybody fit and in the right frame of mind to perform,” McGrath added.

They hope to be better placed when referee Gerard Gallagher throws in the ball on Sunday afternoon.

“I’d like to think we’ll turn it around a bit,” he said. “It is a tough ask against Tempo who have some good players. We’ll have our hands full with them if we are to get over line.”

Being last year’s champions is irrelevant for McGrath. There is no added pressure. It’s winter football and the club’s most crucial game of the season.

“It is down to who wants it more on the day,” McGrath points out. That’s it in a nutshell. “It is going to be a wet heavy pitch and a wet and windy day.”

However, aside from the test for the team, McGrath felt that this game also highlights an issue with fixtures in the county and in Ireland.

“I think there should be a bit more respect for club players giving that it is going into November to play play-off and championship football. It shouldn’t be the way it is.”

There is no split season in his eyes.

“The club player is still put to the side,” McGrath said. “I don’t get what they are talking about. I don’t see any benefit to the club (game) the way they are trying to work it.”

“Hopefully we’ll find a way around it and hopefully get over it, but it not going to be easy,” McGrath concludes.

“The Roslea defeat was a tough one to take, but we have got over the first one and hopefully we can grow from there.” 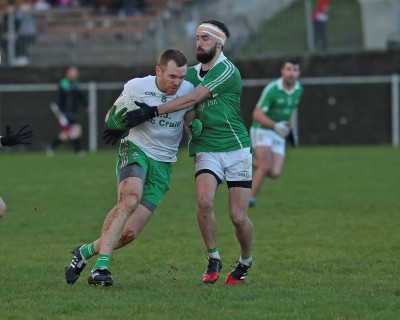