ON Sunday, Erne Gaels travel to Carrickmore in their quest to win a first ever game in the Ulster Intermediate Football Championship.

The Belleek men take on Tyrone champions Moortown, following their two-point victory over their neighbours Devenish three weeks ago in the Fermanagh decider.

Erne Gaels men certainly celebrated the win and are still savouring the success, and manager Seamus Ryder feels it was the just rewards for the hard work and effort put in by the players over the past 13 months.

“It has been a while now (since the final). Celebrations were over after a couple of days and our focus has turned to Ulster.

“Everyone in the club was delighted for them when they saw the work that the lads have put in all year.

“They have been on the road since last November, running the roads during the lockdown so everyone was delighted for them.

“They knew that they had worked hard for it.”

Erne Gaels face a massive challenge this Sunday when they will face the Tyrone intermediate champions in Carrickmore. Moortown defied the odds to defeat a Cathal McShane-inspired Owen Roes by five points in the final and Ryder knows that his players will have to be ‘on the top of their game’ if they are to book their place in the Ulster semi-final.

“We are expecting a big physical battle with them. They have a lot of big men around the middle of the field, they have a strong full-forward but they are also well organised defensively as well.

“They are well organised, they have good forwards, strong defensively and we are going to have to be on the top of our game to beat them.”

While Erne Gaels are rookies to the Ulster Championship, just 14 miles up the road, their neighbours Derrygonnelly Harps are ready to compete in the provincial competition again, for the ninth time.

Ryder feels that his players need to embrace the same spirit that the Harps attack the Ulster Championship with, to try and get over the winning line themselves.

“We want to push on and win the game against the Tyrone champions. They would be a big benchmark. We want to start winning games in Ulster.

“You see Derrygonnelly, the last few times they have been in Ulster, they have pulled off wins. They have done well and we want to be the same, where we want to win.” 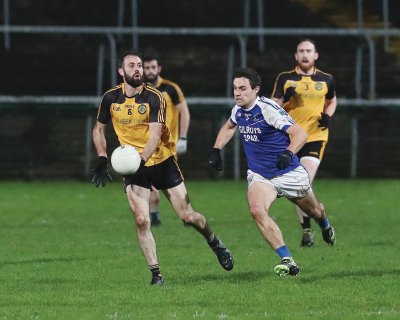