A YEAR is a long time in football and that’s certainly the case in Derrygonnelly.

The Harps’ hopes of six successive Fermanagh titles were quashed by Ederney in last year’s decider, but they are now one hour away from becoming the first team from the county to lift the Seamus McFerran Cup.

This season, they took a well-travelled route through the Fermanagh championship and needed replays to see off Ederney and Kinawley before overcoming Enniskillen Gaels in the decider.

“I think we were maybe a bit nervous after last year,” Jones admits.

“I felt were the better team on both the days (drawn games), but we were just a bit nervous and afraid of losing again. Once we got over that hurdle, we gained great confidence.”

In the Ulster arena, they travelled to Carrickmore to take on Ulster in a game that transpired into a classic.  Stephen McGullion and Ryan Jones ruled the skies, but Derrygonnelly needed Conall Jones to fire over a pressure free – the last kick of the game – to earn extra time. And they haven’t looked back since.

“Obviously that Dromore game was a big one for us,” he recalls.  “To get over the line there, it has really kick-started this whole Ulster campaign. It has given us a serious firing block to start off with.

“It was a Tyrone club, a very close neighbouring club and they were strong favourites for the game. When a game goes to the wire and into extra time, it maybe adds a wee bit more. The fact that it went to extra-time, you feel better that you know you went into the trenches.”

Jones and man of the match Shane McGullion (2) hit early goals to give the Harps an electric start in their win over Clann Éireann. 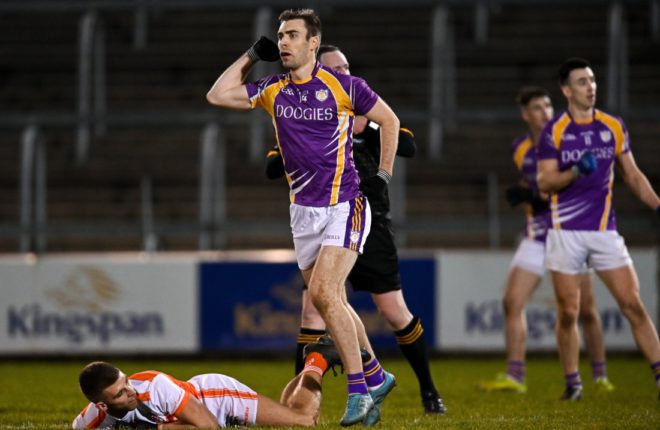 Now they face Ulster champions Kilcoo, who defeated Derrygonnelly (1-8 to 0-9) in the 2019 semi-final.  It was an encounter decided by the quick-thinking of Conor Laverty, who popped a free short that resulted in a game-clinching goal for Aaron Branagan.

After winning six of the last seven Fermanagh titles their stock has been steadily rising in the Ulster championship.

“Obviously our first few years in Ulster we were probably a bit out of our depth,” he said,

They were on the wrong end of a 4-13 to 1-4 defeat at the hands of Sleacht Néill in 2015 before running the Emmet’s to five points the following year.

A replay defeat to Cavan Gaels in 2017 was the closest them came to the final hurdle, until now.

“You gain a lot of knowledge (from being in Ulster) and I suppose this year we know that we have a good age profile” Jones adds.

“Everybody in the club knows how hard it is to get to the final, so we are putting as much preparation in as we can to go one step further.

“We are only the third Fermanagh team to make it to an Ulster Final, so we know it doesn’t come around often so you get one chance at it, so we are going to try and give it everything we have.

“We are aware of what is ahead of us, we just have to go out and give it our all and the result will maybe look after itself.”