Which teams did you represent?
Belcoo, O’Rahilly’s at all ages, St Michael’s College at all ages and Fermanagh at all ages. I will not mention that other sport or I will be here all day.

What’s your current involvement?
Currently managing the Belcoo senior team, my first and most likely my last foray into management as the stress was near too much last year. I am considering a player-manager role so I can get a few raps at some lads next year Ciaran Corrigan, if I can catch him!.

What are your favourite memories from your playing days.
Jeepers where would I start? I have so many great memories playing for Belcoo youth teams and St Columban’s Primary right through to St Michael’s. The successful period with St Michael’s provided memories that will never be forgotten. I loved those days, either a Wednesday at 1pm or a Saturday morning with lads that you were with most days of the week. It was a real tight-knit group that stood beside each other through thick and thin.

It was a well-run set-up right at St Michael’s and we had a good bunch of the best players about at that time. We had some memories from nights out, bus journeys, the trips to Tuam, serious battles against top class teams.

Winning the MacRory Cup was a great achievement and was a high point at the time followed by a low of losing the final the following year.

Fermanagh was a mixed time as I wasn’t committed to it for many reasons but the main reason was in relation to the set-ups. At no real stage, apart from under Malachy O’Roruke and Peter Canavan, did I feel this is a proper set-up with the right ideas to really push on and compete right at the top of Ulster.

I always had the chance to play some soccer and it was constantly pulling at me. This may appear as I wasn’t loyal or dedicated to my county, but I would push back on that and say that a lot of the county set-ups I tasted through my time where miles behind what I had imagined.

Did I miss out? Most definitely. The 2004 run was unbelievable but tinged with regret as I should have been playing but I didn’t commit. That’s no-one’s fault only my own for maybe expecting a bit more with senior county team set-up than I had tasted.

With Belcoo I had many fantastic memories and the best one was undoubtedly winning the first senior title in the club’s history, albeit the league, but the first and only senior title. I can remember the celebrations that took place after, and seeing the joy and pride on my father’s face will live with me forever.

What was your greatest moment in the GAA?
I probably touched on a few above, but the moments are the MacRory win, the Ulster final journey in 2008 and being part of the management team in 2018 and, again in 2019. We went on the run to another Ulster final, and were a win away from the uncharted territory of Division One.

The scene when walking around in the parade in 2008 was spectacular with the green and orange colours in Clones brighter than I ever imagined. The Belcoo League title 2009 (I think). There are so many moments it’s hard to pick one but representing your senior county team for the first time as a teenager and then having the honour to play in an Ulster Senior final will probably rank as the highest.

At half-time I was on my way back to the changing room and I could sense someone coming closer behind me and by the time I got to the tunnel ‘bang’, I got a  slap to the back of the head, I looked round and saw that Marty McGrath, Barry Owens and Darran Lunney were all close by so I ran after the specific player to introduce myself properly. All hell broke loose.

Managers, players, linesmen, priests you name it, pandemonium ensued. The referee (Michael Crowe) came into the changing room looking for no “14 McCabe”. Dom Corrigan had me hiding in the showers. Anyway, myself and a few Abbey CBS lads got booked and warned. We went on to win the game comprehensively!

Not so surprising was when Peter Canavan rang when he got appointed to the job as I had been tipped off he was going to ring. However there were many stories that I enjoy when Peter was in charge but one in particular stands out.

We were in Division Three and going well sitting well positioned after three games. We were away to Antrim and it was going ding-dust again with a point or two in it the whole game. We were without three or four top players that night and we couldn’t afford to lose the game. Coming up to the last few minutes Antrim were getting some momentum and looking like they were going to beat us.

“McCabe, McCabe” I looked over and Canavan was calling me to the sideline. He says “are you booked?” I says “no, I don’t think so anyway”. He says: “right you’re gonna have to start a row” with the wee serious stare. I says “FFS Pete, I am the smallest hoor on the pitch”. He says: “You’re gonna have to do something”.

I reluctantly agreed and I said: “right, right, right, who with?” He says: “yer man there will do”. I looks over and the man he was pointing out was at least six foot and built like a tank. Anyway the challenge was accepted and I went to get to know said player. The game was delayed three minutes, caused me a broken nose and ultimately the modelling career!

But on a serious note getting to work under Peter’s management was top class. He is a real good guy who wanted and expected so much more of every player and someone who I had no problem getting bate around Casement for!

Who was the best player you ever played with?
Jeepers here we go, I played with a lot of good players, but the top five would be below. Alright I know it’s not five but only those people with too much time will notice.

Ryan McCluskey – He could play almost everywhere, made the game so simple, a great reader and man marker, apart from marking me in training!

Raymie / Rory Gallagher – I played with both when started out in county and Raymie had a left foot yet to be bettered. Rory had a great brain and right foot that averaged seven points per game (so he reminds me anyway). Barry Owens, Colm Bradley, Marty McGrath, Mark Little and Eamon Maguire were great players that had their own standout qualities.

The best without doubt was Stevie ‘Boots’ Maguire – I played with Stevie from I was 15 playing for Belcoo seniors, and one or two years with the county. The two of us connected straight away. He looked after me in the early years when things may have been getting a bit physical. If I was playing inside Stevie would know where to put the ball before I did, and I think we had the same connection when I played out the field. My son Charlie and Stevie’s son Cillian are playing for Belcoo now and it’s great to see.

What was the best score you ever saw in a game you were involved in?
I think I will have to give it to Ryan Jones’s goal against Westmeath in 2013 Qualifier down in Westmeath. We were a Division Three and they were a Division One team. We were under pressure as we hadn’t performed well in the championship the previous three games.

This was ding-dust again and there was a point or two in it. Jonesy was just about to be substituted, well he should have been anyway, but he picked up a ball about 30 yards out took it about 10 yards and rifled it into the top corner of the net. He ran away waving to anyone he could see! Some other great scores would have been witnessed scored by Stevie Maguire from close to the halfway line. 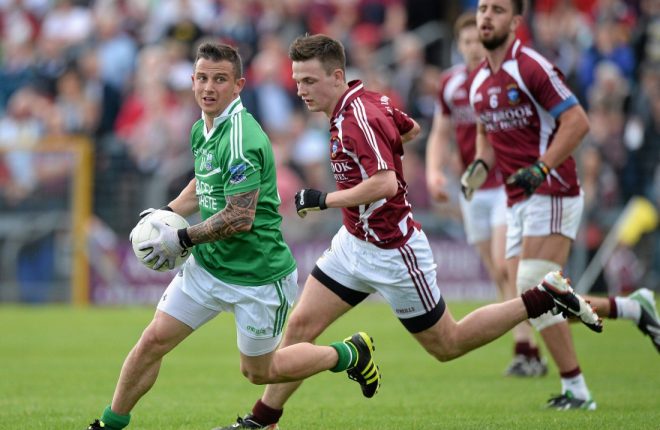 THE GAA needs a weekly television programme, and it merits more coverage than the Irish League. That’s the opinion...