CARRICKCRUPPEN are gearing up for an Ulster Championship quarter-final against Tir na nÓg, Randalstown this Sunday, after claiming their first Armagh Intermediate title in 17 years.

Despite winning the Division 2B league title earlier in the year, Carrickcruppen were seen as outsiders to win the championship, and were viewed as a young team, a few years away from their prime.

The team includes many of the players who won an Intermediate crown at u-21 in 2019, and managers Barry Flynn and Paul Cunningham always had faith that their team was ready to translate that success to senior level this year.

Flynn said: “Myself and Paul came in this year, and straight away we talked about winning the Intermediate Championship.

“People talked about us having a good young team coming through, but our words to the players were: ‘we want to be a good team now. Why wait for a couple of years?’”

Carrickcruppen are now reaping the benefits of a successful underage programme, which saw their youth teams competing amongst the best in the county.

“People knew we had good players in our club, but I suppose the general opinion was, ‘they’re a bit young, and they’re a bit light,’ but the likes of their age group have been playing in Division One and went to semi-finals and finals at u-16’s and minor, so they have been knocking about for a while.”

One such talent who has shone brightly this year is Eoin Woods, who put in a man-of-the-match display in the win against Culloville, and Flynn feels that a call-up to county level may come knocking soon.

“Eoin Woods is as good a forward at that age group as there is about; I’d imagine he’d get the call, once our season is over, to join the senior panel (for Armagh).”

Woods is just one of a talented bunch, and Flynn feels that this generation of Carrickcruppen footballers bringing home silverware only serves to inspire the players of the future.

“Our players Richard Keenan and Blaine Hughes went around the schools with the trophies, which is great and hopefully inspires these kids and drives recruitment on for us at underage, which is so important.

“When we paraded the cup through the village, there were young lads and young girls there saying, ‘I want to do that someday.’

“A good run like this generates finance, it generates interest and helps to keep driving the development of the club.”

Before turning their attention to Ulster, Flynn stressed the importance of allowing his players to celebrate their achievements, and the five-week gap between competitive games, has
offered them the chance to do just that.

“There is the momentum-killer aspect, so we need to build that back up, but at the same time it’s just given us that bit of breathing space to enjoy it. We have a few older heads who went through the period when Carrickcruppen lost 18 competitive games in a row, and that’s a massive weight off their shoulders to go and win something.”

However, Carrickcruppen have now firmly turned their attention to this Sunday’s match-up against Tir na nÓg, Randalstown, who are an unfamiliar opponent, but with the added benefits of the increased club football coverage, Flynn has been able to some scouting on them.

“The world is a smaller place now – you’re never far away from a bit of information here or there. One of the advantages is that everything is getting streamed. You have access to the tapes now and we’ll have our homework done.”

As for whether or not Carrickcruppen can go all the way?

“It’s very hard to judge the standard across Ulster, but if you go on a game-by-game basis we’ve been getting stronger, and what I will say is, anybody who beats us will be a very good team.” 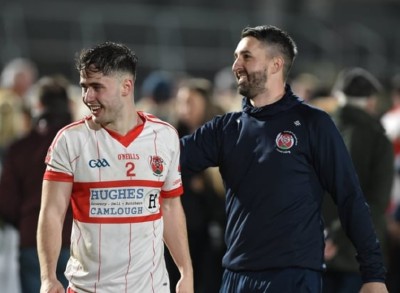