FORMER Derry captain Mark Lynch says that Derry should be proud of their performance against Donegal in last weekend’s Ulster Championship quarter-final.

And he actually believes that this team has an Ulster title in them.

“I don’t see any reason why not. They are a young side, they are very hungry. I also see that Rory always says that the team have committed to each other, and are committed to the cause. If they stick together and keep improving every year, and they get some younger players in from that minor sides and u-20 sides, then they can succeed.”

The Oak Leafers lost by 0-16 to 0-15 in Ballybofey, yet Lynch says there is more to be pleased about than disappointed.

“I think they can take a hell of a lot from it. I was a proud Derry fan on Sunday. I am not one for moral victories, I have been through plenty of them myself. That is not what Rory or the team will be looking for. They were there to win. They did everything they could to win. There were a couple of chances that they didn’t take. That wonder point from McBrearty, after not having leather in his hands all day, that beat them.”

Lynch says that the team have huge potential and will come back stronger next year.

“They are a young team. They are only getting started. Last year was not much of an Ulster Championship, they didn’t get enough preparations and it was rushed. They got a real stab at it this year. They are a brilliant young side and came on leaps and bounds and the future is bright for them.”

What impressed Lynch most was how the team approached the game. He said their attitude suggested that Derry are a team that have great belief in themselves.

“They showed great maturity for a young side playing against a very experienced side. They matched them in every aspect of the game, and it was just very small margins that beat them.”

Lynch said that there was very little that Derry did wrong.

“They did an awful lot right. Donegal are an experienced side and were always going to come back into it, which they did. Had Derry taken their goal chances that would have driven them on to victory. That didn’t happen and Donegal clawed it back. You are never going to keep Donegal out of it for the whole game. I don’t think anyone will want Derry in next year’s Ulster C hampionship.” 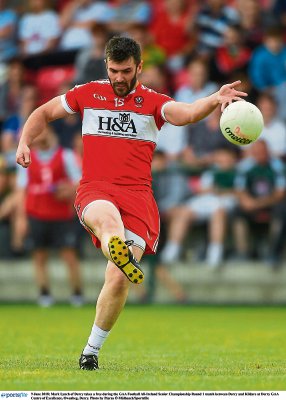