GLEN selector Johnny Bradley said Donegal goalkeeper Shaun Patton is a ‘serious weapon’ and a player the Derry champions will need to prepare for ahead of Sunday’s clash with St Eunan’s.

After winning their first Derry championship, the bookies have Malachy O’Rourke’s side in the conversation to win the All-Ireland, but Bradley insists they’ll continue their mantra of taking it one game at a time.

Bradley is a lecturer in Performance Analysis in Carlow IT and works in the background for RTÉ on their analysis during the inter-county championship.

The Watties’ opposition kick-out press worked a treat in their
wins over Swatragh, Loup and Slaughtneil.

“There is two ways of getting the ball – turnovers and kick-outs,” said Bradley, a former Derry player.

At the start of last season, Glen converted

“It is such an important part now, with your own kick-outs and trying to get them away. On opposition kick-outs, you work so hard to get a shot away or a score that you want to get it back as quick as you can.”

Bradley speaks of how goalkeepers have ‘such a pivotal role’ in the game and placed Patton in a group with the elite ‘keepers, including Stephen Cluxton.

“In 2019 he had a seriously good year with Donegal,” said Bradley, who was an analyst with Monaghan during Seamus McEnaney’s previous stint as boss.

“He (Patton) can go short, he can go long, he can pick boys out. He offers a serious challenge on Sunday.

It will be Glen’s first taste of the Ulster club championship after four (minor) and three (U21) provincial titles at underage level, with the club’s ladies also having a strong tradition on the Ulster scene.

“It is a very special time for the club,” said Bradley. “There is a sense of relief and a lot of people in the club have dedicated their lives to winning the Derry championship.

“The players have put in a serious shift over the last 10 or 15 years to better themselves.

“The boys don’t realise how many people they made happy around the club. You do see the families involved, but there is such a wide community out there.”

Looking deeper in Sunday’s opponents, Bradley said Letterkenny will be ‘a big test’ for his side.

“They have been thereabouts (in Donegal) and were pipped at the post last year. They had a serious performance against Glenties in the final,” he said.

He fires off names like Niall and Shane O’Donnell, Kieran Tobin and full-back Caolan Ward.

“They are littered with county standard players. We know they offer a serious step for us on Sunday.”

In a similar manner to the Glen players field post county final questions about their acceptance of the favourites tag, Bradley didn’t entertain it.

“I know it is a cliché…” said Bradley, “but it is literally a focus on the next game and your own performance.

“Our boys have good expectations for themselves personally, so it is about going from game to game.

“That has been the way we have approached it all year, going from game to game and every team presents a new challenge.

“At this stage when you get to Ulster, every team has had a good year. St Eunan’s have had a serious campaign.” 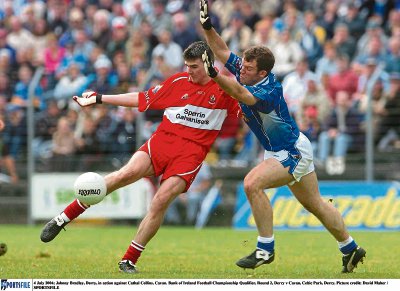