SHANE McDevitt has had to wait a long time to get stuck into senior championship fare and he is certainly enjoying the 2021 campaign.

McDevitt was a familiar face helping out in the background over the last decade with Glenswilly.

As a former county minor and u-20 player, he seemed set to become an important figure for the Glen at senior level.

However, that hasn’t quite transpired until this year. The 21-year-old is now out to make up for lost time and impressed against Killybegs before scoring a crucial goal against MacCumhaill’s last week. He will hope to carry that form into the St Naul’s game on Saturday.

“We were laughing about that after the Killybegs match,” said the lively corner-forward. “We had a few young boys in their first year making their championship debut and I was making mine as well even though it’s my fourth year with the seniors.

“I’ve just been unlucky with injuries. Three years ago I had to get an operation on my right foot after a bit of bone broke away.

“The next year I pulled my hamstring against St Michael’s the week before the championship, and last year I did ligaments in Milford in the first game after lockdown.

“Thankfully things are going better this year, touch wood We have two victories and everyone is enjoying their football.

“We are a young enough team and it has boosted our confidence. You’ve still got the older players there like Michael (Murphy), ‘Copper’ (Gary McFadden) and Caolan (Kelly) and all the younger boys are following in behind.”

McDevitt watched St Naul’s defeat Termon and he then made the short journey to see them take on Glenfin last week, so he has a good idea of what they will encounter this Saturday.

“St Naul’s are a good team. Peadar Mogan and Stuart Connolly are two very good players and then they have scorers like Stephen Griffin.

“We will get nothing easy over there but we are looking forward to it and we will see how it goes.

Their goalkeeper Gavin Mulreany felt they should have got something from the game.

However, there is no time to mourn lost points when Glenswilly are set to visit.

“Glenswilly are always going to be tough in the championship especially when you have the Michael Murphy effect.

“They have four points on the board so the pressure is probably off them a bit. We probably should have got a draw at least against Glenfin last week.

“That was disappointing but you have to move on. Glenswilly won three senior championships in the last ten years so you can never write them off.”

St Naul’s enjoy playing at Gerard Gallagher Memorial Park and Mulreany wants his team to make the most of their home comforts.

“Your home games are important. You saw that with the likes of Milford and Bundoran last week.

“You have got to make them count. We have been lucky enough with the draw so far that we haven’t met any of the top four.

“But in saying that, you can’t write anyone off, and most of the games are very tight.”

Stuart Johnston and Shane Conneely provide experience for Naul’s as do the Griffin brothers Stephen and Barry, but it is largely a youthful outfit outside of that quartet.

“We were counting it one day and we really only have four players who are over 28. So if we can keep the rest of our team there for the next four or five years and bring through one or two every season, it is promising looking for us.

“The likes of Thomas White and Daniel Meehan have done really well and Kyle Campbell has probably been our player of the year so far.

“We are lucky that we have Brendan (McCole) and Peadar (Mogan) to push things on. When they are there, the standard at training and games lifts straight away.

“We are fortunate because not every team gets to play with players of that calibre.” 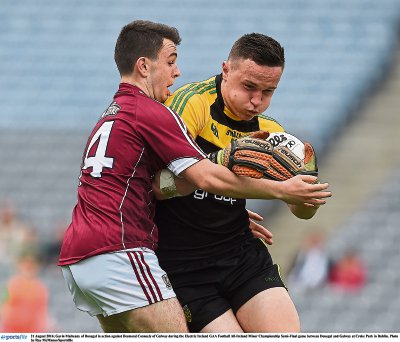