McNabb finished as top scorer in this year’s club championship. A tricky forward for O’Neill Cup winners Dromore, McNabb had a fantastic campaign right from the word go. His consistency in front of the posts was particularly commendable, and he showed great nerve to strike a couple of late points against rivals Trillick in the semi-finals. He had a great day out in the final as well, scoring six points, two from play, against Coalisland. A Tyrone call up could soon be on the cards for this talented score-getter.

Donaghy had a ridiculous championship campaign for Dungannon last year. Donaghy, who is blessed with lovely shooting technique, had transferred from neighbouring club Edendork and he wasted no time in getting down to business with the Clarkes, regularly racking up huge scores en route to the final. His free-taking was also exemplary throughout, and he finished as the championship’s top scorer with plenty to spare.

McCurry is in the form of his life for Tyrone at the moment, but he’s always been deadly accurate when given the opportunity. He had a great season for his club, Edendork, in 2019, and it’s worth recalling his performance against Carrickmore in the championship quarter-final replay, where he hit 10 points in a thrilling replay encounter. His side actually lost that night but it was an unforgettable performance from the attacking maestro.

Ardboe embarked on a memorable run back in 2019 with players like Shea McGuigan and Kyle Coney in top form during their campaign, which ended in an extra-time semi-final defeat to Killyclogher. The former Tyrone footballer was unerringly accurate from frees that year, and bagged a couple of goals to boot.

Brennan has adorned the Trillick jersey with distinction for years now, and actually finished as second top scorer in this year’s competition. Brennan, who famously hit 3-14 in a club league match against Strabane, won the Patsy Forbes award for the second time in 2017, even though Trillick bowed out at the semi-final stages with a one-point defeat to eventual winners Omagh St Enda’s.

One year after winning the All-Ireland U21 title with Tyrone, Bradley showed his worth with a stupendous showing for his club, who won the county title with a replay victory over Coalisland. Bradley saved his best for last as he produced a truly memorably display in that replay, knocking over points from all angles despite being marked by his Tyrone teammate Michael McKernan. His performance was so good that it drew comparisons with Red Hand legend Peter Canavan.

Trillick won the Intermediate Championship in 2014, and in hindsight it’s possibly no great surprise that it wasn’t long before they were making waves at senior level when you consider the depth of talent in their squad. They won the Senior title in 2015 with victory over Killyclogher in the final, and Brennan, who was still only a teenager, scored the winning point that day. He scored 1-4 in the final which was some return given his youth.

O’Neill has always had an eye for goal, and he scored four goals in Omagh’s Senior Championship triumph in 2014. Having recovered from a sickening cruciate impact, he was one of St Enda’s men main that year, culminating in a narrow defeat to Sleacht Néill in the Ulster final. Carrickmore fans won’t want to be reminded of his impact in the county showpiece – O’Neill score a last-gasp goal as they claimed their first title since 1988.

McAliskey was in great nick in 2013, starting for Tyrone in the All-Ireland semi-final against Mayo. He carried that form into the club championships and his ability to score from tight angles was crucial in a hard-fought victory over Carrickmore in the final. He also had a super day out in their quarter-final win over Eglish, chipping in with eight points across the hour.

Amazingly, 36-year-old Eoin McCusker is still going strong for Dromore, hitting six points in a cameo performance as they defeated reigning champions Dungannon in their first round clash this year. He won the Patsy Forbes three teams in his career – it’s not for nothing that he’s renowned as one of the best Tyrone club footballers ever. He came out on top in 2012 with a total of 2-15, and while he was extremely well-marked in the final against Errigal Ciaran, he still contributed a number of important frees that day. 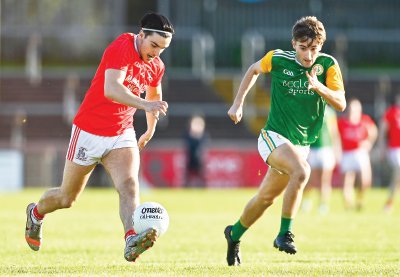