VETERAN Gortin forward Shane Clarke admits that the side is desperate to go one step further than last year and get their hands on the Paddy Cullen Cup- though there is a lot of work still to be done to achieve that dream.

Having edged out Tattyreagh by a single point in the first round, the St Patrick’s now come up against a Beragh team this Saturday who were in ‘red’ hot form in their Championship opener, hitting Naomh Eoghan for seven goals.

Gortin came through some titanic tussles in last year’s competition only to come up short against a star-studded Edendork line-up in the final. Having got a sniff of glory in 2020, Shane Clarke acknowledges that it would mean so much for the team to get over the winning line this season, and adds that it would be particularly special for the more experienced members of the squad.

“Last year we were proud of what we did though it ended in disappointment in the final. We were up against a good Edendork side. Brian, Niall, Peter Keenan, those boys are in their thirties and like myself we all want to get medals while we still have time

“The boys have all trained hard and got back at it. The first aim was to get past Tattyreagh but obviously the long term aim is to go one better than last year.”

The playing career of long serving Gortin stalwart Clarke stretches back to the Millennium County Final when their hopes of silverware were dashed after a replay by this weekend’s opponents Beragh.

“We have had plenty of battles with Beragh down the years. They beat us in the final in 2000 which was some time ago now. I have met them manys a time and hopefully we will get past them.”

A thunderous effort from centre-half back Brian McGarvey in the dying embers of a tight-fought encounter helped Gortin to pip Tattyreagh at the post last time out. It was a gruelling struggle, though the nature of the contest came as no surprise to Shane.

“ But they are also good footballers. Two years ago they won the Intermediate. We knew we were up against it and that it would go down to the wire over the full 65 minutes. We were there three times last year in tight games and pulled through and lucky enough we pulled through this year again.

“We didn’t get playing the football we like to get playing. But we dug deep and got the result that we wanted.”

While this weekend’s opponents Beragh pulled off the result of the first round, Clarke is confident that they have the men capable of rising to the challenge against Jack Campbell & co in the Red Knights attack.

“The Championship is all to do with character. We are a small unit squad wise but our strength is our heart and determination. That won’t be broken. We aren’t scared of anybody, we will take on whoever is in front of us.” 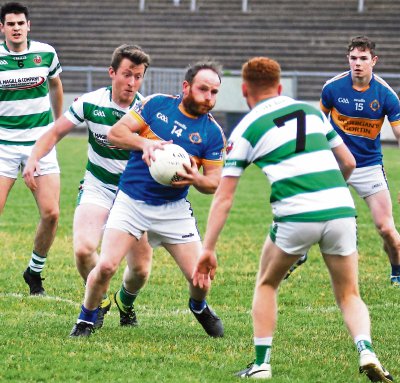