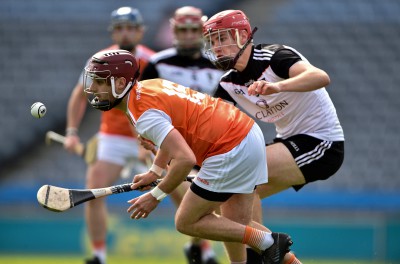 22 June 2019; Danny Magee of Armagh in action against Niall Feehily of Sligo during the Nicky Rackard Cup Final match between Armagh and Sligo at Croke Park in Dublin. Photo by Matt BrowneSportsfile

26 July 2017; Brian Cassidy of Derry in action against Liam Savage of Down during the Bord Gáis Energy Ulster GAA Hurling U21 Championship Final match between Derry and Down at Corrigan Park in Belfast. Photo by Oliver McVeighSportsfile