KILCAR manager John McNulty admitted that while this weekend is not the ideal time to play the 2020 Donegal Senior Football Championship final, they are just happy to get it played.

The match should have been played last Autumn, but the county did not complete their championship in time to have it fnished. Therefore the match has been postponed and will be decided on Saturday night (MacCumhaill Park, 8pm).

McNulty said: “We have been waiting a long time for this game to be played. There have been a lot of dates bandied about. Even up to two weeks ago it was fixed for the weekend of the 29th. Then all of a sudden panic set in because of the rising numbers of Covid. Then it was brought forward two weeks. It is what it is. It is the same for both camps. We had to prepare for it and be ready for it.”

The game is between two of the big-hitters in the county. Kilcar boast some of the finest talent in Donegal. They have county stars like Ryan McHugh and Patrick McBrearty among others. Naomh Conaill are the reigning county champions, having beaten Gaoth Dobhair in a three-game final in 2019. The game also is a rematch of the 2017 final when Kilcar won their first title since 1993.

“Naomh Conaill are the reigning champions and it has been a while since any club did back-to-back, so they will be looking at that. It is important for us with this present squad that we have.

“We last won it in 2017. Since then we have been knocking on the door. The years have been passing, but we have a good group of lads. It is important that we can take a title back to the village.”

Kilcar beat Gaoth Dobhair in September 2020 in the Donegal Senior Championship semi-final in a close-fought affair. Kilcar had the better start with a few good scores, but Gaoth Dobhair hit back with a goal. At half time it was all square Gaoth Dobhair 1-3 Kilcar 0-6. In the second half, thanks to Patrick McBrearty among others, Kilcar pulled away.

“If you look back at last year we were in better form after beating Gaoth Dobhair. We were in better shape then. Naomh Conaill are in better shape this year in the league as they have won all their matches and have been putting up big scores. They probably are in a better vein of form. But it is on the night. It is who wants it the most. There is not a lot between the two sides. They are two excellent squads. It is going to be who performs the best on the night.”

McNulty said that the Kilcar team are eager to get the game played.

“They are anxious to get on with this saga. There is a good atmosphere around the parish since the county lads joined up with the squad. Training has been fairly intense for the last three or four weeks. Everyone just wants to get on with it.

“Hopefully it won’t be like the 2017 final which was very cautious from both sides. Both squads have teams that are more attack minded now. I would expect a cautious approach early on and things to open up and hopefully we will get a good entertaining game.”

Kilcar have no injuries to report bar a couple of players who have long-term cruciate injuries. Brian O’Donnell the full-back from last year is out while Aidan McGinley and Dylan O’Gara are also recovering. 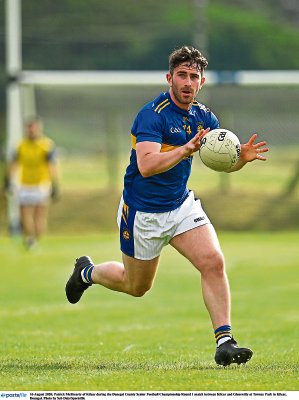 TIME TO SHINE…Patrick McBrearty is a key player for Kilcar