FORMER Down Ladies’ manager Peter Lynch is returning to take charge of his home club Shane O’Neills who he managed between 2008 and 2018. He returns, having led his Down team to an Ulster Intermediate side, alongside co-manager Caoibhe Sloan, and he is hoping to bring some of his county expertise back to his local ladies side.

“It was probably always my intention to return to club management,” said Lynch. “Even though I thoroughly enjoyed my experience with Down and I loved every minute of it, I always felt that coming back to the club with broader horizons than when we [he and Sloan] left, I could perhaps bring something back, that helps the club develop again.”

Lynch and Sloan had been co-managers for a number of years, originally with Shane O’Neills and then with Down, but she took herself out of coaching for the year due to personal reasons, and Lynch’s new backroom team will be made up of Paul McArdle and Conor McKeown.

“They bring a world of experience,” said Lynch, discussing their appointments.

“Paul’s home club would be Young Ireland’s in Dundalk, but he lives in this area now. In 2016, he was doing a lot of analysis work for us on opponents. On days we were playing, Paul was travelling and watching our next potential opponents, so I know the way he works. He’s very thorough, meticulous and very well organised.

“Conor is still currently the senior men’s goalkeeper at Shane’s. He had a spell with Armagh as well, back in Paul Grimley’s time. He was our goalkeeping coach in 2016 and 2017, so I know he has very valuable input.

“We’ll work as a team. It’s not like one person delegating work, everybody has an input, and everybody is valued and respected.”

Due to the long time Lynch spent in charge of Shane’s, he still has a rapport with the squad and has already coached almost every player on the panel.

Shane O’Neill’s never had ladies’ football before 2008, but with exciting prospects such as Aimee and Blaithin Mackin, Louise Kenny and others excelling at underage, the club began developing the girls’ teams, and the young team Lynch coached back then, are still thriving as key players today.

“Aimee [Mackin], Moya [Feehan], Louise [Kenny], Blaithin [Mackin], Hannah [McMenamin], and all of that crew from u-12 team from 2008 are still really the backbone of the current team, 14 years later.”

Lynch’s biggest achievement in his first spell with Shane O’Neills was when he took the team to the All-Ireland Intermediate final in 2016, and since then the Camlough side have grown in strength at senior level.

Yet to capture a Senior Championship in Armagh, the hope for Lynch is that his side will once again be amongst the favourites this year.

“The jump from intermediate to senior is massive,” he said.

“Teams like Clann Éireann, Carrickcruppen, Armagh Harps are more experienced sides than Shane’s are, and they have set the standards. So, while we have narrowed the gap on them, we still haven’t bridged the gap.

“But the team has been maturing and developing, and getting a wee bit wiser, tactically and they are a smarter team now, I think.

“In the last couple of years Seamus [McParland] did great work with the team. They won a first senior league in Division One and narrowly lost in two semi-finals, so the hope is that we can build on that and be a serious contender.” 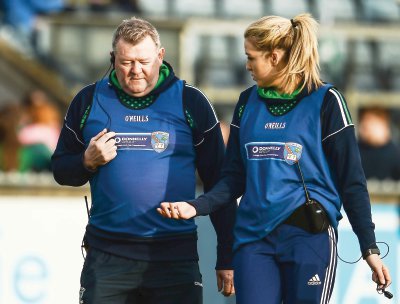 BACK IN CHARGE…Peter Lynch, left, is set for another season in charge of Shane O’Neill’s ladies

BACK IN CHARGE…Peter Lynch, left, is set for another season in charge of Shan e O’ Neill’s ladies