CLAN Na Gael joint-manager Diarmaid Marsden has said that the club’s return to the Senior Championship has been long overdue.

The Lurgan outfit are preparing for the roughest of landings, a preliminary round clash with Crossmaglen at the Athletic Grounds on Sunday (4.30pm), but regardless of the outcome, the Orchard legend said that it will be a proud day to be back in the top ranks.

“Going back to 2012, I think we might have won one of the first round games and then we were knocked out in the quarter-final or something,” said Marsden, who takes the side along with Joe Lavery.

“League positions then aligned with the championship so where we fell that year meant that we ended up in the intermediate. If the choice was ours, as it used to be when you could choose about dropping down a grade, I don’t think we would have elected to do that.

“That was the way it was though and unfortunately we struggled to get out of there. Unfortunately that was the level we were at. We couldn’t argue and I think Stefan (Campbell) said in one of his interviews last year that we wanted to come out of it by actually winning the Intermediate Championship, and that materialised.”

Undoubtedly, Clan na Gael’s preparation for their return to the top level has been hampered by the Covid-19 pandemic and its impact on Armagh club football.

Intermediate success usually carries with it automatic promotion, but with the league season being combined between 2020 and 2021 the side had to forego a chance of playing senior teams to warm up.

“We are delighted to be back up at senior level but it’s a bit of a strange year in that we are still playing intermediate league football,” Marsden continued.

“The preparations for the challenges that lie ahead just might not have been as strong as we would have wished. We are where we are though.”

The Clan na Gael-Cross rivalry is perhaps the most famed in the Orchard county, and with three Ulster titles to their name and an All-Ireland final appearance in there too the Clans have their own strong roll of honour.

However, there is no denying that they are rank outsiders against Stephen Kernan’s side, who are set to be without the injured Oisin O’Neill.

“It’s Crossmaglen and it’s also the preliminary round so you have all that to deal with,” Marsden continued.

“This year we’ve had a better preparation compared to last year when we didn’t get back onto the field to June with the championship in August. At least this year we have been back since April and have been able to get a fair bit of work done.

“The league at intermediate level certainly wouldn’t be as high as it would be at Senior B or Senior A, so we know we’re going in as massive underdogs.

“If we can get ourselves in a good position, the mental game, and if injuries clear up, then we’ll give it a go. I felt that last year, around the time of the Intermediate Championship win, we could have given anyone a game. So we want to get back to that level and even better.” 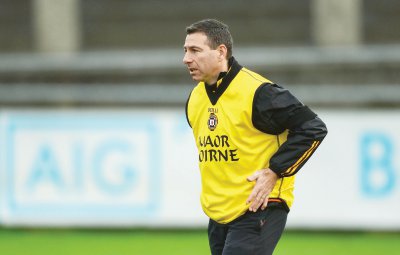