ANDY McGovern spent 12 years working as one of Cavan’s Coaching and Games staff before stepping aside at the end of last year.

Having coached thousands of players across the different strands of football in the Breffni county, he’s well-placed to assess the senior intercounty team, and doesn’t believe there is any reason for players or fans to panic ahead of their relegation play-off against Wicklow this weekend.

Manager Mickey Graham seems to have used the league in part to blood new players, fielding five debutants across their three group stage matches, and McGovern says that’s one of the explanatory factors behind their fairly mixed form.

The Killygarry clubman explained: “They have a number of new lads in – the likes of Paddy Lynch from Crosserlough – and in fairness to Mickey he’s probably got one eye on the championship and it can be hard to get things right in the league, especially with limited time due to Covid.

“Personally I don’t think they’re setting up any different than last year, and having so many new personnel is probably have an impact. Whether you’ll see the same or different team against Tyrone next month, it’s hard to say.”

There’s a widely held perception that Mickey Graham, who led the team to their first Ulster Championship since 1997 last year, doesn’t really ‘care’ about the league. McGovern doesn’t believe that to be the case, however.

“It’s probably wrong to say that, things just haven’t really worked out. From being in and around Breffni in recent years, I know the county wants to be playing in Division One.

“Last year they were relegated but it was a bit of a disaster for everyone with Covid, so I wouldn’t say it’s a case of not bothering about the league.

“Cavan can always pick it up in the championship and on their day can beat nearly anyone. At half time in their matches against Down and Monaghan last year, you’d nearly have been tempted to turn off the TV, but they threw off the shackles in the second half. I know Mickey and Dermot (McCabe) have definitely tried to implement a more attacking brand of football, they don’t sit back as much as in some previous years.”

McGovern also acknowledges that the news that Ciaran Brady sustained an ACL injury against Derry is a massive blow to the team.

“He was unlucky not to get an All-Star last year, I thought he was fierce hard done by. One of the strengths of the Cavan side is their half-back line – himself, Oisin Kieran and Luke Fortune. That’s a formidable line and they seem to have a licence to attack at every opportunity, so it’ll be difficult to replace Ciaran.”

Despite the difficulties of the last few weeks, he still gives Cavan a fighting chance in their Ulster Championship opener against Tyrone, even though they have a miserly record against the Red Hands down through the years.

“I suppose Cavan are probably the team to beat in Ulster now and the surprise element is probably gone. In saying that, their league form has been fairly patchy anyway.

“They’ve a tough first-round match against Tyrone in the championship, but Cavan won’t fear Tyrone, they’ll go in as Ulster champions and I think they’ll be able to hold their own. I don’t see much in it either way.”

McGovern, who was the county’s Games Development Officer for five years before moving on, also says it was rewarding to see players he’s coached win that elusive Ulster Championship last year.

“I suppose the hard work behind the scenes has paid off in that we’re now competing at a high level.

“Lads like Caoimhin McGovern and Oisin Brady came on against Derry, young lads who came through the system.

“I always felt Cavan had the potential. We’re a football-mad county, but maybe we weren’t getting our hands dirty like we should’ve been.

“It was great to see Cavan win Ulster, you wonder if you’re doing the right thing as coaches so it was rewarding.

“In fairness there’s been a huge emphasis on skills over the years, skills-based training and small-sided games. It’s going by the Dublin model really. You can work on all the systems you want but you have to have players who are comfortable on the ball. It was great to work with players who always wanted to be there and who wanted to listen and to improve.” 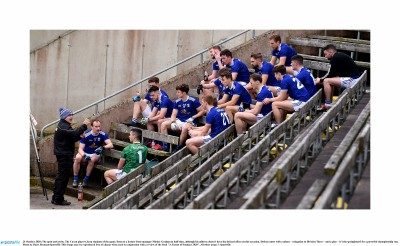 24 October 2020; The open university. The Cavan players, keen students of the game, listen to a lecture from manager Mickey Graham at half-time, although his address doesn’t have the desired effect on this occasion. Defeat comes with a minus – relegation to Division Three – and a plus – it’s the springboard for a powerful championship run. Photo by Daire BrennanSportsfile This image may be reproduced free of charge when used in conjunction with a review of the book “A Season of Sundays 2020”. All other usage © Sportsfile

24 October 2020; Cavan manager Mickey Graham speaks to his players during half time of the Allianz Football League Division 2 Round 7 match between Cavan and Roscommon at Kingspan Breffni Park in Cavan. Due to ongoing restrictions imposed by the Irish Government to contain the spread of the Coronavirus (Covid-19) pandemic, elite sport is still permitted to take place behind closed doors. Photo by Daire BrennanSportsfile

21 April 2017; Mentors from Co Cavan Andy McGovern, left, and Aidan McCabe practice as they preach during the Go Games Provincial Days in partnership with Littlewoods Ireland Day 7 at Croke Park in Dublin. Photo by Cody GlennSportsfile

21 April 2017; Mentors from Co Cavan Andy McGovern, left, and Aidan McCabe practice as they preach during the Go Games Provincial Days in partnership with Littlewoods Ireland Day 7 at Croke Park in Dublin. Photo by Cody GlennSportsfile