PORTGLENONE face an 11th-hour decision to see if their captain Niall McKeever will be available for this weekend’s Antrim SFC Quarter-Final with Lamh Dhearg.

The Antrim and fomer AFL star was sent off in their 1-7 to 0-7 victory over neighbours Ahoghill in their must win last group game. His case is due to be heard on Friday night and should he get his card rescinded it would a boost for the Casements.

Sunday’s clash (Dunsilly 1.00) is a repeat of their 2019 semi-final trilogy, won by Lamh Dhearg after a second replay.

The first replay went to extra time and free-kicks at The Dub, with Antrim Chairman calling a halt to proceedings when the sides were level at nine kicks each, insisting on a second replay despite the tie due to be played to a finish on the night. 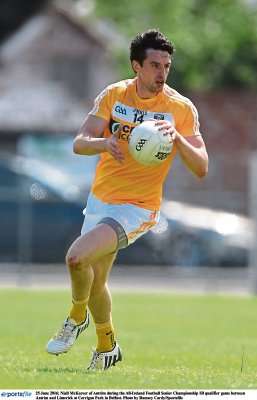