IF ANTRIM are to win this weekend then they need to have the right attitude.

That is the assessment of Lucia McNaughton, the Antrim camogie captain. Having the right attitude includes not getting overhyped by the occasion, and also being prepared for an intense performance from their opponents Kilkenny.

“I have every faith in the ability of our team. Kilkenny are going to be very tough to beat. They are going to work very hard. When we look at them they have threats all over the field. Their forwards have pace and they really have strength all over the pitch. In saying that we also have a lot of strong players.

“So it will be about getting our heads right. That is something that we have to work on.”

The excitement for many of the Antrim players surrounds the opportunity of playing in Croke Park.

McNaughton said: “That was the big buzz after the Galway match. We got to training after that semi-final and we said to ourselves that it is going to be amazing to get to play at Croke Park in an All-Ireland final. But we said that the All-Ireland is there to be won. We have to think that it is a just a match to be won.”

Last year Antrim reached the Intermediate final but lost to Down. The team were young, and in transition, and were still developing under the new management team of Paul McKillen, Jim McKernan and Elaine Dowds.

McNaughton says that the team have learned a lot in the past year.

“We have been tackling better. We are trying to adapt on the pitch. We have a lot more experience of playing really tough matches. We have been able to stay in the whole game.

“It has helped that they have water breaks now as they help us to focus.”

The difference from last year compared to this year have been obvious to Lucia McNaughton.

“I think that because we have been there before we can learn from that.”

Antrim defeated Kerry in the quarter-final before going on to beat Galway in the semi-final, though they had to overcome the concession of a late goal in order to do so.

“We got off to a great start in the semi-final, we got the two goals. But it didn’t feel like we had got them because the game was so intense. They were so big and strong. Thankfully we got over them.

“We don’t want to be in the same situation against Kilkenny. We need to try and finish out the game.”

Antrim played Kilkenny earlier this year so they know a little about what to expect.

“It will be different. Some of the players might not be the same. They did play a sweeper. Things might change, it depends on what happens in the game. We have some different girls as well. I think the teams will have changed a lot from that game.” 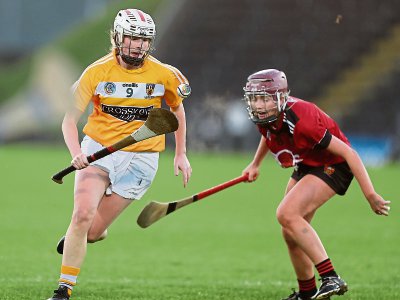