TWO Tyrone brothers have experience the odd situation of having to line out against each other in a club match.

Sean McElroy (32), who plays in goal for Augher, and his brother Rory (23) who’s the Clogher goalkeeper were pitted against each other last Sunday in an Intermediate League clash. Clogher won 0-20 to 0-8.

The family watched on at the weekend in the strange game but they came away feeling good as neither team conceded any goals.

The result was one-sided but the story of how two siblings came to be playing against each other is unusual.

The family live between Augher and Clogher but Sean and Rory’s parents had no allegiance to either club.

The two boys went to a small primary school in the countryside of Augher (St Patricks Primary school, Aughadarragh) but the catchment area had Clogher families too.

Therefore, their mother allowed her boys to choose which team they wanted to play for. Sean chose Augher, and Rory picked Clogher.

All Sean’s friends played for Augher so that’s why he chose them.

It seems that it was something of a shock that Rory decided to play for Clogher because his school friends were from Augher.

His reasoning was perhaps that their cousin Marc McConnell played for Clogher and Rory wanted to play with him.

There is nine years between the two brothers so it is only in recent years that the opportunity came for them to line out against each other and it happened last weekend in a Tyrone league match.

This is the third year in a row that the two clubs have been in Intermediate in Tyrone, Rory has been in goals for Clogher for all three games but this year was Sean’s return after having not played for a number of years thus making it the first time they went head to head.

The rivalry was heightened when Rory and Sean’s sisters married Clogher players, so it is a situation where the whole family is against Sean,

Sean’s wife is from Clogher as well and they made the decision to send their son Darragh to play for Clogher. Although he has an Augher jersey and a Clogher jersey so he can get confused sometimes.

Despite being only 23 Rory is the current Youth Officer in Clogher and apparently he is doing a great job. 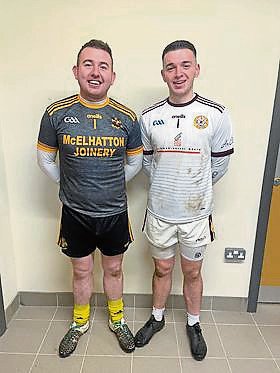 OH BROTHER!…Sean McElroy (left) and his brother Rory. Sean plays for Augher and Rory plays for Clogher and they lined out against each other last weekend in a league match.