It was a game a long time ago. We had a poor club year. We had lost a lot of players the previous year and we were in a relegation battle in October. We were winning the game then 15 minutes into the second half I broke a leg. I was marking big Kevin McCloy. I went out, turned and the body moved but the leg didn’t. I went to hospital and found out later that Magherafelt had won. But the irony was that a week later they changed the rules so that no one would be relegated. You couldn’t make it up. It was nothing game.

Which club game, that you watched, will you never forget and why?

In 2018, our girls and boys had qualified for the All-Ireland feile series. The boys played Burren in the A section. The game finished six-five to Magherafelt. It had everything you could ask for in a match. Goal line clearances, action, tension. It stands out a for me, particularly the home coming. And the girls won their section as well. Even as I am speaking about it I am getting goosebumps. I was working with the goalkeeper at the time and he was outstanding. That Burren team have progressed and have come through.

The All-Ireland quarter final in 2007. I can remember walking around behind the bands and hearing the noise that was coming from the Hill. It was something else. It was unique to us because we had never played the Dubs in Croke Park. It was massive. I was standing in goals with the Hill behind me. The noise ringing out around me was something else. I had played in Casement and Clones, but to play in front of the Hill with that noise was something else.

That is the obvious one, Derry 1993. Having watched the whole game and then go and stand in the middle of your town to watch the bus come through and the razzmatazz that came with that. It was a special moment for the county to get that first win. It brought the county together. Derry football grew from strength to strength after that. Derry should have got another one, if not two. But Derry club football got very strong after that.

I was going up to watch Dungannon Clarke’s play. The fella called James Slater was playing corner-forward. The ball was put in. He got the ball and he sold this dummy, and there were two guys standing behind him, spectators hanging over the fence, and from where I was standing I could see them clearly, and it looked as if they bought the dummy as well and they nearly fell over. It was hilarious.

The two boys followed the corner-backs movement in the way he bought the dummy. It looked as they tripped over each other. It was very funny.

What was the strangest thing you ever saw in a game?

I was playing this match. We were minors and playing against Glen. There were a couple of points in it at half time. I was playing at midfield and the ball broke to our centre half-forward.

He picked it up and the whole pitch opened up for him, and away he went and stuck it over the bar. But he stuck it over our bar. We were roaring at him. He was full of adrenaline and came out with the fist up. We just looked at him but the Glen boys were buckled laughing at him.

I was involved with the Derry minors with Damian McErlain. We got to the semi-final and were underdogs against Donegal. The performance that stood out for me was Jack Doherty from Glen.

Hand on heart, I didn’t think it was possible to cover that much ground in one day. He came up to me after the game and you could see the white foam coming out of his mouth. It stood out as a performance. We had Conor Glass and Paudie McGrogan, but everywhere the ball went he was there.

It is simple, the big days with the big crowds at Casement or Croke Park or Clones. A sunny day with fans was hard to beat.

The fact that we had so much quality players in our side (Derry) but underachieved. Not even winning an Ulster title. We had a team that was as good as anyone. But we came up against Armagh and Tyrone teams who were serious outfits. 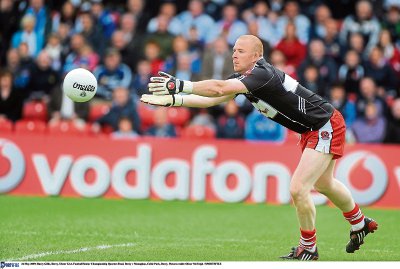