This one is easy for me, the All-Ireland Intermediate club final in 2011 which we won in extra time. To play in Croke Park with your club is the stuff you dream about and for it to happen in the style it did – I happened to hit a free in the dying seconds of normal time to ensure we would get another chance at it in extra time, and thankfully for the team and our entire club circle, we managed to see it out well in that period. A day I surely will never forget.

Which club game, that you watched, will you never forget and why?

Well so far in my life time I think Corofin is best club team I have ever seen, and their performance in the All-Ireland club final in Croke Park in 2019 versus Dr Crokes was as perfect a performance you could ever ask for. You talk about ‘team’, well everything they did that day epitomised that word. The flow, chemistry and excellence on show that day was just magical to watch.

I will have to go for a county u21 game in which we played Down. Managed by Pete McGrath, Down had won the All Ireland with almost same team at minor level. We weren’t given much hope, but we played without fear and freedom and overcame them that day. I managed to score 10 points and the game was played at my home pitch in Lisnaskea which made it that bit more special. We were managed by Sean Maguire and assisted by Padriag Treanor, both of whom I had a lot of respect for.

It has to be the All-Ireland semi final in 2004 that Fermanagh drew with Mayo. It was an achievement to get there but it was disappointing to fall when they were so close to reaching an All-Ireland final. Unfortunately they couldn’t find that winning score the first day out but the buzz, excitement and happiness in the county during this time and at the game itself was breathtaking. Days like this one for the county of Fermanagh don’t come around too often so how could we forget it?

Well this wasn’t actually funny at the time as the game was nip and tuck but only a few months ago, a player from our own club scored a point for the opposition late on in a game which it ended in a draw.

I had never ever saw this happen before so looking back on this, it was quite funny. At the end of the day it’s only a game and it’s good to have a laugh!

Well I’m going to mention two players here. In Fermanagh’s run in 2004, two lads that stood out to me was my club mate Mark Little (Lisnaskea) and Eamon Maguire (St Pat’s). These two players played at wing forward and both were unmarkable at times with their energy, pace and trickery.

This is quite a tough one as there were a few to pick from,but I’m going to go for Brian Og Maguire’s (RIP) performance in the All-Ireland club semi final in 2011 versus Ballymore Eustace (Kildare).

Ogie was marking James Kavanagh who was a proven quality footballer with Kildare also, but Brian Og produced a momentous performance that day with his outrageous fielding in the middle of the park.

He wasn’t the tallest of players but by God he could leap. He not only dominated James that day but he inspired us as team with his inspirational moments, and drove us on to a fairly comfortable victory that day in the end and ensured we were heading to the Croke Park for the final.

Well the participation alone was great for me. I loved playing football full stop but also the challenge of trying to help your team win. I also enjoyed swinging over points on a warm summer day. (Get Overrrr! as Barry Mulrone used to say)

Well, my biggest attribute was scoring and more often than not I was up against the better defenders on each team when playing for the club. Regularly coming off second best in games was something I had to get used to. 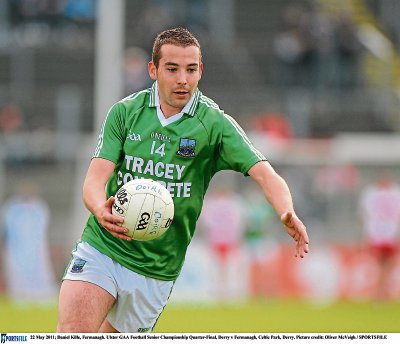