TEEMORE man Barry Owens played his first game for the Erne county back in 2000, against Tipperary in the All Ireland B final. 21 years later and Owens is still pulling on the green and white, but it’s the green and white of Teemore.

The 39-year-old is togging out for his 23rd year for the Shamrocks’ senior team but this season he has also decided to get a feel for management alongside Conor Doherty the trainer, Gerry Quinlan, his brother Sean, Jarlath Hegarty and Declan McGovern.

“I am only dabbling with it at the minute, and this year could change things!” he laughs.

“It is sometimes hard juggling the two but so far it’s working out alright.

“It is something different. When you retire, I suppose it’s the only real avenue you have for staying within the football scene. I have been helping out with underage teams for a number of years as well, it is good to keep yourself involved with it.

“There is a lot more work in it than you probably would have expected. It is not just a matter of turning up, lining a team out and that. You have to look at the different teams and see how they are going, what their main strengths are and try and develop a way for teams to play, and to counteract other teams.”

Owens has been lining out at full-forward this season and the maintenance electrician admits he is fortunate to still be playing for the club.

“You hope to play as long as you can and I was just fortunate to have been able to keep going this long. People probably look at me and probably think, what’s that ejit still playing for but when you’re fit to, you may as well try to,” says the father-of-three who accepts the game has changed.

“The way the modern game has gone you need to be trying new things, like playing men back and being able to adapt to that and then changing between that and our traditional style which was more man to man.”

But he’s glad he had his intercounty career when he did.

“I think I am happier that I played the majority of my football back when I did, when you could just go out and play football and there wasn’t as much emphasis on stopping the other team playing, rather than going out and winning the game yourself.”

Changing his style of play is nothing new to the Teemore man though, dating back to when he was playing MacRory Cup football with St Michael’s.

“When I was younger, I would have played and marked from behind rather than in front and Dom (Corrigan) probably got me to change my style, and play in front, instead of waiting for the man to win the ball, and try and win it yourself.”

A style of play that delivered him a MacRory Cup medal in 1999. From there Owens went on to be regarded as one of the best full-backs in the country, winning All-Star awards in 2004 and 2006.

He marked some of the best forwards in the country over the years, a few of which were particularly tough assignments.

“Ronan Clarke was strong, fast and had great feet on him. When you played Mayo, you had Trevor and Conor Mortimer and they were brilliant players too. It is hard to pick anyone out. Stephen O’Neill often gave me the run-a-round.”

But it wasn’t in defence that Owens learned his ‘trade’.

“I fell into that role accidentally. I had always played midfield or centre half-back for the club, so it was something that I had to learn more than anything. Being quick and probably strong got me through a lot of those games.”

With one Senior Championship medal (2003), an Intermediate Championship (2012) a league medal (2003) on his list of honours for Teemore, Owens says “we have lost more than we won anyway” and as one of the oldest players on the team now, he knows his playing days are nearing an end.

“You are training more or less five times a week, and I don’t know if I will be fit to keep that up for much longer. I am making the most of what I have left.”

And making the most of it, is something he likes to reiterate to the younger players on the team. “You only have a certain amount of chances and it is about making the most of those chances. Your career doesn’t go on forever. You think you are invincible at the start when you are 18, 19, 20, but it goes by in a flash, unfortunately.”

Owens is readying himself for the league campaign ahead and against Coa this Friday he is expecting a tough game, as they go in search of promotion from Division Two.

“Coa have improved year on year and they have actually beat us this year. We will not be taking it for granted and we know that they are big and strong footballers coming through, and we are expecting a tough enough battle from them.”

For club and county Owens has excelled and while it hasn’t always been rewarded by cups and medals, there is nobody that would question what an important role he has played in both jerseys.

“I suppose the regret is that we never won an Ulster Championship or more championships with Teemore. That is just, on the day, bad luck.

“We tried everything to win it and we just didn’t have the luck on the day.”

Read the full feature in the Fermanagh Herald where Barry Owens talks about his family, his health and playing against the best players in Ulster. 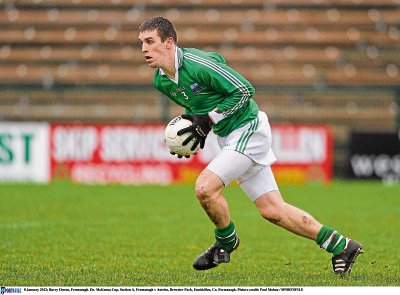