DUNGIVEN aren’t getting carried away with a start to the season, says selector Mark Quigley.

Friday’s home win over Coleraine took them to third in the table, backing up victories over Lavey, Loup and Claudy, with a 1-10 to 0-10 defeat to Glen the blot on their season so far.

Dungiven were operating in the intermediate league in recent seasons, but Derry CCC’s decision to increase the top flight from 12 to 16 teams has suited them insists Quigley, a selector under new manager Geoffrey McGonagle, a former club and county dual player.

McGonagle also brought Declan ‘Honda’ Mullan on board as trainer, with James McNicholl to fully commit his involvement when the Derry minor footballers end their season.

“I would say Dungiven has never done hard work like it,” Quigley said of Mullan’s structured training programme.

“It’s fierce; it’s a long time since Dungiven were as fit. It’s like county (training) with timed runs and all the proper recovery.”

Derry have rolled out their leagues in tandem with the inter-county season, with relegation and promotion only based on championship placings later in the season.

“We are just seeing if the players can bed down and play senior football…realistically the league is suiting us, with the format that it is in,” said Quigley of the management’s policy.

“We are playing as many of them (younger players) as we can. If we are left alone, it is probably a three-year job. We are getting the age profile right. We have brought in young lads out of the u-19s.

“We’re no fools; we are going out there and getting results at the minute, but it is a great system for boys to develop.” 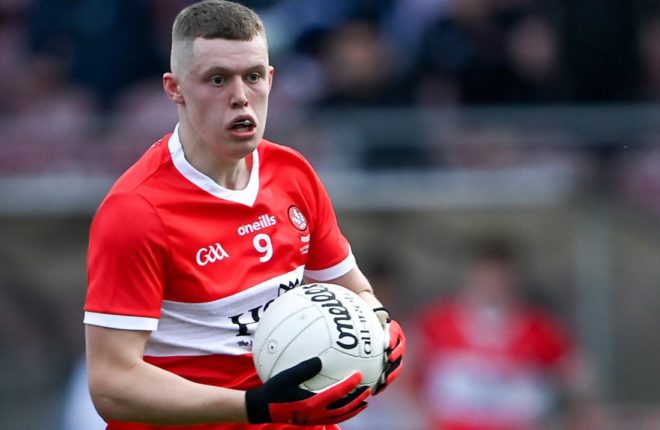 Paddy O’Kane is now in his second year of senior football having won an All-Ireland Minor title with Derry and put in creditable performances with the u-20 team.

Dungiven have benefited from the presence of former Derry defender Kevin Johnston who returned last season after a stint in Australia.

“Johnsy has given us a real presence in the middle, he’s strong and a really stylish player,” Quigley said.

Four years ago, Dungiven appointed Emmett Stewart as their own Games Promotion Officer to pull their underage structures into place.

It will help build a sustained flow of players into the senior squad in the future, but for now it’s about starting that progress.

They face Sleacht Néill this weekend, who have made steady progress in the absence of their Derry football and hurling contingent.

“If any other team had to suffer the losses they have, they’d be at the bottom of the league,” Quigley said of Saturday’s opponents.

“It will be a good experience for us; the more we face teams like Coleraine and Sleacht Néill the better. Any time you are going out to play Coleraine and the five McGoldricks are on, that’s a learning day for you.”

Further down the line, Dungiven must strive to win a first knock-out championship game since 2014.

“It is going to take time; you just don’t turn that juggernaut around,” Quigley said. “Dungiven are probably the biggest club in north Derry and when you are opening the programme for a Derry match and you don’t see any representation at senior level, it’s a big knock to north Derry football.”