HOW the Derry minors deal with their heavy recent schedule could define Sunday’s All-Ireland final against Kerry.

Derry have been on a heavy run of matches since their semi-final victory over Tyrone on June 26, and have played every weekend since. They beat Monaghan in the Ulster final and then last week they defeated Meath. They had a week to prepare for Sunday’s final against Kerry.

Manager Martin Boyle said: “The big unknown is how they deal with week on week. It is all about recovery but we do want to get a little bit of football in.

“We have to mindful to how they deal with four games in a row. That is tough for adult teams. Each game has went to the wire so they haven’t been able to take the foot off the pedal. It has been very intense and very draining on the lads.

“ That’s the worry how they recover and how they present themselves on the field.”

Boyle said that they have to be conscious about how much work they can put their players through. He says he looks to Peter Hughes, the strength and conditioning coach, for advice on that.

So the preparations will be limited to some ball work and to look at tactics and things to improve upon from their last performance. Derry beat Meath by 1-14 to 1-7. Boyle explained how they managed to get past a Meath team he expected would cause them problems.

“Trying to shut down their big forwards was key. We were aware of their key players but we wanted to encourage our own players to get up the field and affect the game. Conor Shields scored a point from corner back. Adam McGonigle got forward and won a free.

“We felt that the players have to know that they have to join the attack. The more the numbers that attack the better it is.”

This weekend they are playing a Kerry team who are out to win back the title for the county after they lost it last year. The Kingdom had won from 2014 to 2018, but Cork won the title in 2019. The delayed 2020 competition is an opportunity for Kerry to regain their title.

Boyle said that the team is going to present a huge step up in challenge for his Derry side.

“I have been having nightmares about Kerry. The very thought of playing Kerry in All-Ireland final brings excitement but it also brings shockwaves when you watch them. When you see that they hit 3-21 last Sunday, and they hit 3-18 from play (against Roscommon).

“They have a serious array of scoring forwards and two midfielders who get up the field, and a half back line who have two very good wing backs who get forward. So the challenge is dealing with an array of scorers. That is the biggest challenge.”

However, they are not worried about it.

“It is a good problem to have. Our boys will be able to take the instructions that we give them. I am also sure that they will have went off and looked at them and they will come in with ideas of their own of how we can go into this game, which is great.

“I would back our players. They have done it so far and I am sure that they can do it again.”

The Derry minor team will be just be the same as they were against Meath last weekend. There are no injuries or absentees. 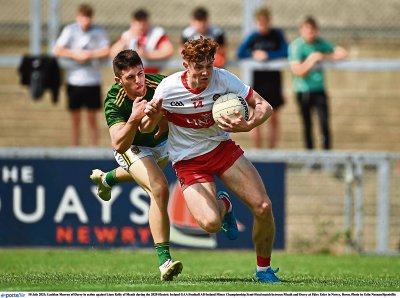