WHEN it comes to experience in the Ulster Club Championship, not many teams remaining boast as much knowhow as Scotstown. This year they secured their seventh county title in nine seasons and on Sunday they face newbies to the competition Glen.

The Derry champions are the bookies favourites heading into the contest, but the bookmaker’s odds won’t trouble the An Bhoth men. Darren Hughes has been a mainstay for the Monaghan kingpins, and he is looking forward to the challenge. “The Ulster Club takes on a whole new life. It’s different, it’s a great competition, it’s exciting to go on and play,” he said.

“You look forward to looking into new teams and systems and seeing what they do and how you have to better yourself.

“You have to look at yourself and what we had done in Monaghan so far this year. We know it wouldn’t be good enough going in on Sunday. We’ve just been thriving for improvement these past few weeks.”

The four-time Ulster winners haven’t tasted provincial success since 1989, despite reaching the decider twice in recent years. Hughes and his fellow players came desperately close to lifting the Seamus McFerran Cup on both occasions, losing twice after extra time to Crossmaglen (2015) and Gaoth Dobhair (2018).

“Personally, I’m fully focused on the Monaghan Championship. I think supporters in Scotstown would always have their eye on Ulster Club and that leads back to the late ‘70s and ‘80s when they were successful in Ulster,” said the Monaghan star.

“It would always be talked about but in the camp, inside in our players group it would be full focus on the Monaghan Championship. Ulster’s great when you get into it, but you have to win your county championship obviously to get through to it. We wouldn’t be looking any further than that any year.”

While Glen offer a fresh challenge, there will be a familiar face along the line. Ex-Monaghan manager Malachy O’Rourke led the Watty Graham’s club to their first ever Derry title and will come up against some of his former Farney players on Sunday.

“We had seven years with Malachy and seven successful years,” said Hughes, who won two Ulster titles under O’Rourke. “It’s no coincidence that success has followed him since and again with the Glen. Previous to us he had a good track record anywhere he went.

“I suppose in the end they coasted to the Derry Championship and that’s testament to Malachy and Ryan (Porter) and the work they put into it. Knowing what they were bringing to the group, it was no surprise to us. There was a lot of talk about them and always having the potential with their success in minor and u-21 winning teams.

“Malachy would have kept in touch since and we had great times in Monaghan, but I suppose we all move on and on Sunday we’ll be in separate changing rooms. One of us will have a smile on our face at the end of it, we’ll shake hands and get on with it.” 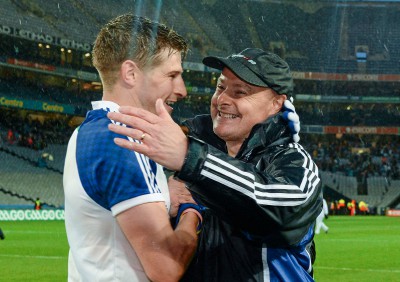 WE MEET AGAIN…After years battling together for Monaghan, Darren Hughes and Malachy O’Rourke will be in separate changing rooms this weekend.