THERE will be a familiar feel to Saturday’s Donegal hurling decider as champions Setanta take on St Eunan’s for fourth time in five years.

The men from ‘The Cross’, outside Killygordon, were victors on all three occasions and wear the favourites’ tag.

Setanta are managed by Gary McGettigan, a native of Castlefin who played with Strabane Shamrocks until dwindling numbers saw them fade off the scene in 2015.

“I got involved playing for Setanta for a few years at the end of my career,” said McGettigan, who came off the bench in the 2017 and 2019 finals. He was their goalkeeper when they lost the 2018 decider to Burt.

After hanging up his hurl, McGettigan has taken over as senior manager, but turns out for the club’s reserves in the junior championship.

Setanta topped the six-team championship group, winning all five games, including a 2-25 to 0-7 win over this weekend’s opponents who lost Cormac Finn to a second booking before half-time.

Finn scored the Letterkenny’s side all-important goal in their semi-final win over Burt, with Setanta running out 2-25 to 0-6 winners over Buncrana.

St Eunan’s have a handful of players involved in the club’s senior and reserve football finals, including county player Sean McVeigh and Kevin Kealy who start on both teams.

Setanta’s have a handful players playing a bit of reserve football with Red Hugh’s and Castlefin, but hurling always comes first in the pecking order.

“If there is a clash in matches, which happens regularly, these boys will always play the hurling,” McGettigan explains.

“There are practically no dual players.

“There are no issues, if there is training on two nights they’ll all go to the hurling.”

Setanta had 10 players on the Donegal senior team this season, who have recently been able to hold their own with neighbours Derry, and have won the Nicky Rackard Cup twice in the last four seasons.

Danny Cullen, Michael Donoghue, Gerard Gilmore, Declan Coulter, Bernard Lafferty and Mark Callaghan, all Setanta, were part of the team that lost a 3-22 to 3-21 clash with Derry earlier this season.

Also on the county panel was Steven McBride, who is currently unavailable after joining up a training programme for the Irish Army.

Another name missing from the team has been Davin Flynn, who has also hurled for Donegal.

“He hasn’t really played much this year,” said McGettigan of the Tipperary native’s family commitments.

“He is back training and he’ll not be far away come Saturday. Our full back from last year, Marty Bonner, hasn’t committed this year due to work commitments.”

Carndonagh moved up from the junior ranks to take the number or senior teams to six.

And while McGettigan acknowledges the league format gives clubs extra games, the five-week lay-off left it difficult to maintain their momentum ahead of the semi-final.

“With another three weeks until the final, we had eight weeks to play two games,” he points out. “It has been awkward to get (challenge) games and it is hard to keep training going for the sake of two games.”

But they are through the other side now and with the county final just around the corner, the Setanta boss speaks of how the teams are ‘sick of playing each other’.

“If you were in Eunan’s position, you’d have a savage hunger after being beat by the same team so many times, so we know it will be a fair battle come Saturday.” 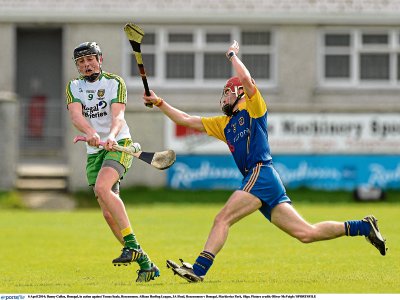