Would have to be the All-Ireland Club final against Mourneabbey. We were five points down with 25 minutes left and we went on to win by five points.

When we beat Monaghan in the Ulster final in 2015 we were massive underdogs and it was the first time we won the Ulster Senior Championship.

The All Ireland final in 2014 Dublin v Cork when Cork came back to beat Dublin.

Roisin ‘Yankee’ Friel got injured in the All-Ireland final and looked like she had been shot by a sniper, doing the most dramatic fall ever.

What was the strangest thing you ever saw in a game?

The goal Dublin scored against us last year will probably never happen again, I don’t think you could do it even if you tried, or Nicole McLaughlin scoring in a game is very strange

Niamh McLaughlin came back from injury just before the Ulster final and scored 3-4 in the final.

I love the competitiveness of the games and being in tight games, also playing alongside my best friends and winning games after working so hard

The games I lost, especially losing games after working so hard towards that game. 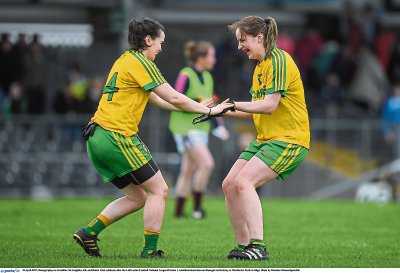