IT took a week for Neil Forester to ‘fully’ come back down to earth after Steelstown’s historic first championship, but the chat among his team mates in the midst of their celebrations piqued their interest in a shot at Ulster.

The Brian Ógs will now move into the senior ranks in 2022 and reality sank in ahead of Saturday’s showdown with Donegal champions Cloughaneely.

“Once we sat down around the table on the Monday (after the Derry final), it was like…’when will we ever get the chance again’, so we began to think about it,” said Forester.

“A lot of the boys were changing their focus fairly quickly, especially some of the younger boys. They have a serious attitude (for more success).

“If we can get past that first hurdle and the ball starts rolling, then you get back into that groove again.”

The Steelstown skipper’s winning feeling after edging out Greenlough ‘surpassed’ his expectations.

“It was a feeling of contentment and accomplishment for the whole week,” he said. Photos popped up on social media. Press reports appeared. Then, by the Friday they were parading the cup around the local schools.

“That real high did last a week,” Forester admits. “Even now, it’s the satisfaction of getting the job done. Which made it special, as I thought I would’ve had that burst of emotion for a few days. But, I suppose when you suffer as much as we did with all those near misses, it makes it all that sweeter.”

Aside from the pain of defeat from their 2020 final defeat to Greenlough, there were lessons from trawling back through the match footage that Forester hopes his side can also carry into this weekend’s visit to Letterkenny.

“The lads learned so much from it and I think you can see that from their performance in the final,” he said.

“We were able to keep that ball for large spells of the second-half (this year). We gave away so much ball in that final last year.

“If we can keep possession; take our scores and be efficient in our scores, we mightn’t be too far away,” he said, referring about their step onto the Ulster stage.

Now, it will be about keeping the play away from Donegal county player Jason McGee, the star of Cloughaneely’s replay win over
Dungloe.

“I know they are strong around midfield with big McGee as their talisman and a real superstar. It is going to be difficult to nullify him and
they have an all-round good team,”
he said. 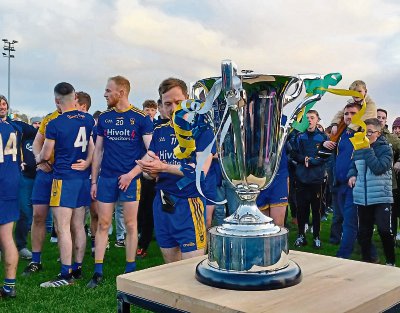