The Treaty county had finished second place in the Division Three South and had lost one game, against Offaly.

They defeated Tipperary by two points, and Wicklow by 10.

Derry came into the game with three wins from three and were clear favourites for the game.

Former Derry forward Conleith Gilligan explained that this game was a test for his home county’s forwards. Could they maintain their devastating attack which had averaged almost 23 points per game? Limerick’s scoring average was 15 points per game.

“Derry had a much superior scoring threat than Limerick. Shane McGuigan was important, but so was Niall Loughlin for Derry,” Gilligan said.

“It was really Limerick who were going to have to mitigate as to how they would stop Shane McGuigan, and to be fair, for long periods in the game, (Brian) Fanning and (Michael) Donovan switched between McGuigan. The problem that Limerick had is that they didn’t have enough defenders to match up to Derry’s forwards. So whenever Shane McGuigan came out, Benny Heron was able to get in behind for three cheap scores. They didn’t have enough high quality defenders to mark Niall Loughlin, to mark McGuigan, to mark Paul Cassidy, or Ciaran McFaul.

“To be fair if Niall Loughlin had scored those two goal chances then the game would have been over at half time.”

Gilligan said that Limerick’s Iain Corbett played a huge part in the Treaty county’s season. However, the way Derry curtailed him was to make sure that McFaul moved a lot. The Derry man moved around a lot and so Corbett couldn’t sit and pick passes and have an effect on the game as he had done in previous matches.

Limerick were also helped greatly by the free-taking of Hugh Bourke, who scored seven points including five from frees.

However, there was one key tactic that made the difference in terms of how Derry were able to bring their greater scoring potential to bear on the game.

“Derry pushed up on Limerick’s kick-outs in the first half. Limerick won 68 percent of their kick-outs, that was only because Derry dropped back in the second half.

“But in the first half, Limerick only won 51 percent of their own kick-outs. Limerick did not push up on Derry’s though. So the problem was that Limerick allowed Derry the platform and that was the difference in the game. Limerick perhaps didn’t trust their defence as much.”

The tactics of sitting back didn’t work because Limerick were too worried about McGuigan.

“The issue was, Shane McGuigan, while he was well enough marshalled, but they left so many other players free. The talk after the game was about Shane McGuigan but he was quiet by his own standards.”

The system that Derry used for their forwards was rotation.

“Paul Cassidy for Bellaghy was tracking back the whole time. Whichever player ran from deep, Cassidy tracked back. He spent most of the game doing that, and that is a thankless job. Derry would have more natural forwards than Paul Cassidy, but he has started every game because Rory Gallagher values that type of forward.

“Niall Toner came off the bench and scored two points. Yes he is the more natural forward, but he doesn’t have that athleticism that Paul Cassidy has.”

Gilligan says that the strength of Derry’s game comes from the interchangeable nature of their players. He said that the likes of Cassidy, McFaul and Heron can move around the pitch.

Indeed, it isn’t just forwards that are interchangeable. Gilligan picked out that in the Limerick game it was clear that the physical make-up of most of the Oak Leaf players is very similar.

“Derry have basically got midfielders playing nearly all over the pitch. If you look at the half-back line, Paudie Cassidy is in there and he is a midfielder, and a very athletic midfielder. Gareth McKinless will play midfield for Ballinderry and is hugely athletic, as is Conor Doherty for Newbridge.

“Ryan Burke, the centre half-forward for Limerick, never got a ball off Gareth McKinless. Plus every time the ball broke Gareth was away. So he spent most of the time chasing Gareth.”

Gilligan also pointed out that Chrissy McKaigue is another midfielder playing out of position in the full-back line. He said that perhaps Paul O’Neill is the only player playing in his natural position.

What having such strong players does is creates a team who are powerful enough to break lines of a blanket defence. That was what happened for their two goal chances that went a-begging.

“All the basis of their attacks are breaking the lines from the half-back line. In Gareth McKinless, they have a player who has been reborn. Gallagher trusts him and has given him a role, and every time the ball breaks he is away.

“That is without even talking about Conor Glass and McFaul’s ability to break the lines.”

Gilligan also noticed another tactic that Derry have used. He says that what Derry have is an ability to win the throw-in. He says he can see how the half-back line pushes forward from the throw-in, expecting Glass to win it and break it down to them, and then they are in a man-to-man situation with the opposition defence because the throw-ins are the only time when a blanket can’t be played.

Gilligan has seen that tactic used by Derry repeatedly this year, and the very fact that they are using it proves that Gallagher’s team are adopting clever set plays to get ahead of their opponents.

“I was worried about the Limerick game. When the talk is good about Derry they tend to have a flat performance. Derry weren’t at their best compared to the other games I have see, but they were very controlled. If they had scored any of the two goal chances they had in the first half, the game would have been over.

“Credit to Limerick. They hung in there. But the scoreline flattered them to a degree.” 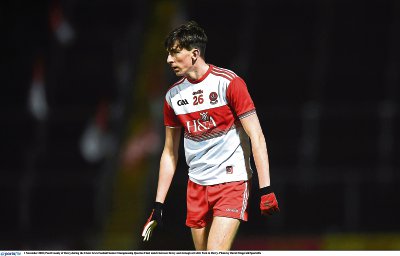