Which team mate has been the most inspirational and why?

Gary Wilson from Toome. If ever there was a fella you’d want to lead you into battle it’s him. We’ve played on the same team since we were about eight or nine years old and he never lets the side down. Skilful, intelligent and although not the biggest in stature he’s as hard as nails. Literally the perfect teammate.

Who’s the best team mate to train with and why?

Brian Flanagan from ‘Blayney hurlers. If you could manage to keep even remotely close to him in the fitness drills then you know you’re in decent shape.

Which team mate is the worst to train with and why?

Which team mate do you want to mark in training and why?

As a forward in hurling either Jamie Guinan or Kevin Crawley because there’s a good chance the fella you’d be marking at the weekend wouldn’t be any tighter on you.

As a defender in football either James Wilson or Frank Connolly. Basically if you could learn how to keep these lads scoreless you’d be well prepared for any opposition player.

Which team mate do you dread marking in training and why?

Padraig ‘Tubs’ Kelly. ’Blayney hurlers. I used to nickname him ‘Windmill’ because it’s fair to say that ‘Tubs’ kept swinging until he made contact with either the ball or you – or both. I went home from training sessions with more bruises than any games.

Which team mate is the best on journeys away?

Eanna MacSuibhne. Always a good man for a story or two. In recent times without doubt Cormac McNally, a great man for pints!

What’s the funniest thing you’ve heard in training or in a match, and who said it?

Pretty much anything Gerry Murphy, our coach, came out with at Monaghan minor hurling training. He was fond of the one-liners and he told us that if we won Ulster he’d dye his hair pink. Everyone thought he was joking, but sure enough, the first session after the Ulster final he landed with a pink mohawk no less.

What’s the worst excuse you’ve heard to get out of training?

There was a fella used to play for Toome rang the manager to say he couldn’t make training because he had a party in Belfast. The same fella was seen driving past the pitch about five minutes after training finished.

Which team mate is the loudest in the changing room?

Which team mate would you want standing over a last-second penalty?

Hurling: Rory Woods, even if there was still three on the line!

Which team mate would you never want to see hitting a last-second penalty?

Football: Gavin Connolly. He would even tell you this himself.

Which team mate is the most sensible?

Hurling: I’d have to say Brian McGuigan, very rarely makes a mistake and always seems to be in the right place at the right time.

Football: There’s not too many to choose from here but probably Gavin Connolly as he knows his limitations not to try anything too fancy and I’d say he has close to 100 per cent pass completion in every game.

Who is the smartest of all your team mates?

Again, there’s not too many of them that would threaten the 600 points in the Leaving Cert so I’ll have to say Eanna MacSuibhne. He is a doctor after all, the problem is he retired when he was about 25 so he wasn’t a teammate for long.

Who’s the best team mate to celebrate with?

I know Mattie O’ Reilly (Toome) would love for me to say him because he fancies himself as a bit of a socialite but he spends most of the night on Snapchat or some other form of social media. I’d have to say Colin Wilson (Toome), he doesn’t get out very often but when he does he enjoys the craic. He also has the ability to keep the same level of drunkeness no matter how many pints he takes. An honourable mention to Stephen McCooey and Daniel Friskey (both Toome) and also Cormac McNally and Fergal Rafter (Blayney hurlers), safe to say all four enjoy a pint. 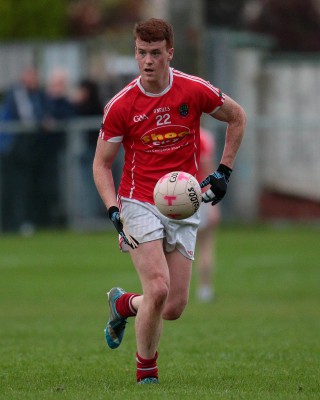 POWER PLAY…He may be more known for his football exploits, but Stephen Lambe would pick Rory Woods to hit a hurling penalty