Game you most enjoyed playing in?

Hard to top winning the All-Ireland intermediate final in 2014. Last year’s championship win over Kildare was another enjoyable win for us as a team.

Game you least enjoyed playing in?

Last year’s championship match against Sligo, one to forget!

What’s the worst pitch you’ve ever played on?

Annsborough where we did all our underage training with the county squads… not a good pitch for the ankles!

Toughest training session you’ve ever been involved in?

Has to be in 2014 on the Bann Road pitch in Castlewellen, think we were up and down the pitch over 35 times and that’s before the sprint work started!

What’s your preferred brand of gear?

Adidas – hard to beat the white Adidas boots, Aishling Cull and Emily Martin seem to love them too!

Most inspirational individual you’ve ever met?

For club, it’s straight to the Ballymartin Inn without a doubt. There wouldn’t be anywhere else in the question.

For county, Belfast is usually the spot.

What do you like to do with you are not training?

I enjoy travelling so usually when it’s off season I’ve a holiday booked somewhere or somewhere planned to go to. Chilling out, reading and going for coffees are usually the smaller things I like to do when I’m not training.

Which character in any TV show/film are you most like?

Which team mates (from club/county) are the first you’d invite on a night out?

I would have to invite Jemma Grant and Niamh Rogers from my club, these two girls have constant drinks coming to the table and provide serious laughs.

From the Down Ladies squad I’d have to leave Natalie McKibbin at home as she usually has to be collected early but I’d have to make sure Meggy Doc is there, life and soul of the party!

Which team mate is the worst dancer?

Mary Adegbamiye – God love her she thinks she’s the best too!

Which team mate is the loudest in the changing room?

People seem to think it’s me and I don’t understand why, Aoife Keown NEVER shuts up!

Jessica Foy trying to shoot with her right peg!

What’s the worst excuse you’ve heard to get out of training and who did it come from?

Ellen and Amy Marks from Ballymartin – ‘sheep’s lambing we can’t come to training’. Two of the biggest farmers about!

Emily Martin. Always injured in winter, summer ball comes and she’s 100 per cent. Think it’s something to do with getting her hair wet!

Worst/best person to sit next to on the team bus?

Worst – Megan Doc, all she does is sleep!

Best – Kate McKay, our captain! Always good crack out of her on the bus journeys

Worst/best person to share a room with on away days?

Best – Aoife Keown, always has some sort of goodies with her.

Worst – Adair Trainor, can’t get a wink of sleep with her snoring.

Worst – Natasha Ferris, always out for cocktails and meals. (Wish I was her lol)

Toughest opponent you have played against?

Ciara Byrne – Down and Saval, she won’t give you an inch!

Best or worst quote you have heard from a team mate/opponent/manager?

Best manager you have played for?

I’ve been fortunate enough to play under some serious managers! Sean O’Hare came into Ballymartin after getting beat in two championship finals in a row and completely changed the structure and mindset of the players and in this year I was lucky to go on and win my first championship with Ballymartin.

Current managers at county level, Caoibhe Sloan and Peter Lynch are absolutely amazing, words can’t describe what they’ve done so far for Down Ladies! Ronan McCartan my current club manager is another great manager who’s passion is evident in each session he takes!

What frustrates you most about the GAA?

Down ladies not being able to get to play on their home ground, Pairc Esler!

Not a lover of Saturday night club league games either!

What’s the best thing about being part of the GAA?

The GAA is something that has been part of my life since I was no age, I don’t know what I would do without it, physically and mentally! The people you meet, the friends you have for life and the rapport you get to build with people from everywhere… it’s amazing! It’s one big community which I love being apart of. 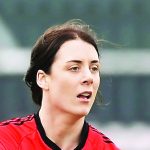 Karen McMullan has played for plenty of teams, and has plenty of ammo to fire at her former team...