I would say there are two sides to this question, you have your typical corner-back that can get their hand in once the ball is released from the midfield into the full-forward line and you also have your player who meets someone on the run and is able to get them stopped and stripped.

Padraig Faulkner is the best man I have seen from a Cavan perspective, and throughout Ulster, at this skill of getting a hand in while also being able to stand the player up and strip.

It comes down to timing, the best tacklers know when to go for the ball when they see an opportunity to strip the player. He is most vulnerable once taking a solo or a hop. You can get more technical if you like and force the player to solo the ball on the side you will be tackling from which will increase your chance of getting the ball.

I would say tackling is a very important skill in the modern game, especially in the forward line with teams sitting back and setting up a defensive shield and being very hard to break down. So if you can get that turnover in the final third, there would be definitely a scoring opportunity made available and sometimes even a goal.

I used to do a drill which consisted of practicing the near-hand tackling within a channel whilst running alongside a player and it’s one I still use today when I am coaching other teams. This will prevent the hand going on the player’s back and cut out some of those unnecessary frees. The same principles applied – near hand, timing, no pulling a jersey and get close enough to the player so you’re not reaching, which could create a foul.

I believe that the game has developed on and teams are looking at some of the more difficult skills (kickout strategies/attacking lines) and neglecting the tackle slightly. Good base skills will win most games.

Near hand, footwork, timing, communication (know when to press), strong in the tackle, touch tight. 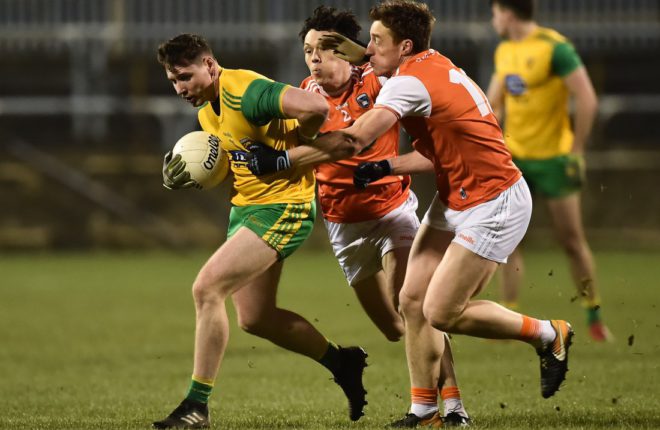 Donal Keogan (Meath) are some of the best in game at the minute.

One-on-one tackling has become somewhat of a dying art with zonal defences and modern defensive systems. There tends to be more of a focus on slowing the attacker down and crowding the ball carrier in twos and threes.

The best tacklers have good body position, excellent footwork, eyes focussed on the target, quick hands, good timing and the control to re-adjust as the movement of the player in possession changes. Having the discipline to remain controlled but same time execute an aggressive tackle is a key skill for any good defender.

Having players that can tackle properly can determine the outcome of any game. How many times have you seen a player give away a ‘cheap free’ through a sloppy tackle or lazy attempt to take a swipe at the ball or lunge into an opponent at a key point in the game?

With the introduction of blanket defences and zonal marking with extra defenders, there’s definitely a lot less of a reliance on one-on-one combat from a tackling point of view but with that said it’s still a very important element. The more times you can successfully dispossess the opposition through a tackle the percentages of success will be more in your favour.

I was fortunate that John Morrison would have coached us from a very young age at the Harps. All of the club and county coaches I had would have highlighted the fundamentals of footwork, body position, eyes and hands. Move with your feet, block with your body, see the ball/player with your eyes, and tackle with your hands. ‘Near hand tackle’ when side on to a player running with the ball was a mantra etched in to my mind over the years.

I remember John Morrison showing us pictures/photographs of top county players of that era making tackles and blocks. This was a brilliant visual aid to show young players ‘this is what it looks like when it’s done well’. My father would have stressed to me the importance of timing and continually readjusting. Realising when the most opportune time is to make contact e.g. when the man on ball has to play it either solo, bounce or pass. The odds are obviously more in your favour if you make contact just when the player has to solo or bounce the ball compared to when they have just taken a solo and they have the ball held tight to their chest.

I played a bit of basketball as well and I found the defensive coaching in basketball had a lot of useful transferable skills. I recall one basketball coach telling us when performing a face on tackle “focus on the ball carrier’s belly button with peripheral vision on the ball.” It left you less susceptible to falling for ‘dummies’. Players can move the ball across a much larger range than they can their belly button, where ever it goes is where the player will be!

The problem with the tackle in Gaelic football is the subjectivity in its interpretation among players, coaches, supporters and referees. The inconsistency of what constitutes a legal tackle can often vary within the same game never mind between games.

That subjectivity and grey area has often been taken advantage of by players and coaches with an attitude of doing ‘what you can get away with’. The extent or range of what you can or can’t do on any given day depending on a referee’s interpretation often leads to frustration. Referees will often ignore fouls/bad tackles in the interests of ‘letting the game flow’.

Tackles are also interpreted differently in different areas of the pitch. How a forward can tackle a defender coming out from his defence with ball near a sideline or in the middle third is often very different to how a defender can tackle a forward straight in front of goal . The threshold of what is an acceptable level of contact is often vastly different. Players and coaches will often seek to push those thresholds to their limit in an effort to gain an advantage.

Sometimes fouls aren’t blown in training with the coach happy to turn a blind eye as a trade off to get higher intensity in terms of physical preparation. The downside is that this can condition players to tackle in certain way which isn’t tolerated on match day fuelling further frustration among players, coaches, supporters and referees.

As mentioned above there is more of a focus with modern day defensive systems on slowing an attack down and using extra numbers to crowd out strong attacking players.

Delay – delay the opponent, slow them down so that you can make the tackle. It’s very difficult to execute a proper tackle when faced with a player running at very high speeds. It also means other players can possibly get back and help you out.

Deny – deny the player space, deny him access to where he wants to go, deny him space and time to think offensively. By doing this you are trying to control where the player can go and forcing them backwards or sidewards.

Dispossess – take the ball off them, hard fast hands to make contact with the ball players’ hands and arms. Dislodge the ball from the opponent’s control when the player has to present the ball for a solo, bounce, pass or shot.

The current Dublin team have the best tacklers in the game, Jonny Cooper and Phily McMahon are probably the stand out tacklers.

Tackling is mostly understood to be disposing the attacker when he is in possession of the ball and this is true, however the best tackle of the lot is beating the forward to possession. Jonny is great at this as he reads the game so well and anticipates the angles and attacks with aggression. Most modern teams are now trying to play a guy like this as the sweeper however the art of marking and preventing possession is making a return.

The current systems that most teams use of flooding men behind the ball and pressing players in small groups of 2/3 is resulting in the demise of the tackle. The tackle now used is a smothering of space as opposed to robbing possession. Now that teams are attempting to move the ball from one end of the pitch to the other quicker then the tackle may become more important, as more one on one scenarios are created.

My grandfather John Joe gave me great advice as a young player which I use regularly when coaching the tackle.

The actual skill of dispossessing your opponent is now coached with most people advising to use the near hand, stay in line with the opposition player and wait for the moment he/she makes the allowed steps before having to either pass or hand toe and at this stage flick the ball loose. All great text book advice.

However most current players at the top of their game can now switch the hand toe or pass to the other foot and therefore putting too much space between the tackler and the ball and not allowing you to dispossess.

The best tackle now, and you need a strong upper body to execute, is the smothering tackle from rugby where the opposition is stopped completely in their tracks and trapped with nowhere to move.

The key points for tackling are aggression, speed, strength. The tackle is mostly won or lost by your feet movement. Fast feet and strong arms make for the best tacklers. I still have yet to see any player that could tackle better than Tony Scullion or one that could beat you to the ball like Kieran McKeever.

Down-Derry derby clash has a big prize at stake