DOWN minors footballer Leah Scholes has had more obstacles than most on her pursuit of excellence. After cancer diagnosis at the age of 15, she is raising money to give something back for the care she received. Darragh Small tells her inspirational story…

DARK humour has been her coping mechanism, while Leah Scholes has always refused to bend to even the most disheartening diagnosis.

She was just 15 when her doctor delivered the news that she had Stage 2 Ovarian Cancer, which was accompanied by the response: “am I going to die?”

The Down minor player turned 18 last March and is currently being upskilled into a Barista. Her summer plans will consist of a part-time job in the local coffee shop and one of her other passions, backed by her trusty Canon camera.

“I’m just finishing my A Levels, I’m going to take a gap year and do photography,” said Scholes. “It’s something I have always had an interest in. I didn’t really want to go to school for another year, I wanted to explore the world around me.

“I like doing action shots for the football club and I did a few for an Armagh match recently. I want to take the pictures in Croke Park one day, if I could have a job in sport I would do it at the drop of a hat.”

In April, Scholes was the super-sub for the Down minors, scoring a goal with her first touch to help them land the Ulster title. It was a remarkable journey to get that point, beginning with heart surgery when she was just three weeks old.

Scholes suffers from a congenital heart defect known as Pulmonary Artery Stenosis, meaning one of the valves in her heart closes over and she has get it stretched. Her first heart operation was when she was a baby and her second could be next year.

The condition also led to an irregular heartbeat but Scholes was never deterred, claiming that Ladies football was the ideal outlet.

“The NHS absolutely love me, as you can tell, in many departments,” jokes Scholes. “I have had the heart condition since I was a baby but the way the doctors see it is the football is keeping me healthy and my heart healthy.”

Her parents, Cathy and John, are sports fanatics and it was always likely that Scholes would end up playing Ladies football, after starting camogie when she was just six.

She went on to become a star for her club, Rostrevor, after the family relocated to the area from South Armagh, and Down came calling in her teens.

It was 2018 and Scholes was playing u-14, u-16 and minor with her club when her adopted county asked her in for trials. Again, she flourished on the big stage until late in one session when she was zapped of all of her energy. Alarm bells began to ring. 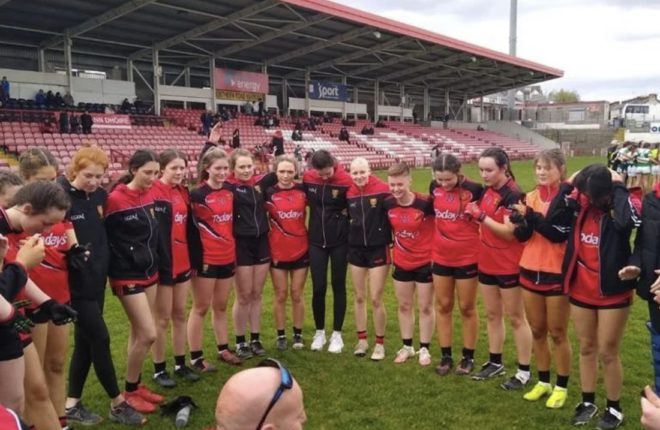 “I got through the trials and after every trial they were dropping so many girls because there was such a big number there,” said Scholes. “I got to the last drill and I remember it like it was yesterday, I had no energy, I couldn’t even kick the ball. It was like someone had taken my batteries out and left them at the side.

“I remember getting into the car after and just sleeping. Mummy and Daddy were like ‘that’s not very you.’ I could usually train until the cows came home.

“It was at that point I was like ‘something is not right here.’ I went to the doctors, got a scan and it was clear. I was having pains in my abdomen area and I kept going to the doctors and they were like: “nothing is showing up, your bloods are clear, your scans are clear.”

“That was the thing we couldn’t understand. At one point I was told it was growing pains. I was like, I’m telling you now, this is not growing pains.’”

They changed her diet but as she remained in discomfort, her parents sought out a fresh insight and Scholes went for another scan. This time a 30cm cyst showed up.

She was rushed to A&E but the significance of the find was lost on Scholes, who was determined to get out in time to play a minor match for Rostrevor. That argument persisted until former Down joint-captain Caolan Mooney got on the phone.

“He was like: “don’t be so stupid, you have one body, you have one life. Get the cyst out and I will help you with your recovery,” said Scholes.

“Caolan is a good friend of Mummy’s, and he was playing for Rostrevor at that point. I wasn’t listening to anyone but I listened to him.”

Scholes showed up to the game but to only stand on the sideline and watch on, as agreed, while her doctors began to plot out her future. The cyst was removed in July 2019 and with her parents believing the worst was over, there was another bombshell awaiting.

Two weeks after her operation, Scholes was back in hospital getting her staples out when the results came back and she was informed she had cancer.

“The cyst was so big and there was no room for it to grow, it leaked and there was cancerous cells in the cyst so that is how I got cancer,” said Scholes.

“I am private about my health, I don’t really have it out in the open but with cancer it was different. I was like ‘I don’t really want to tell anyone; but Mummy was like: “no, you need to tell your friends because you will see changes in your appearance, more than likely.”

Scholes went for more tests in the Royal Belfast Hospital for Sick Children, where they discussed the plan of action from there. And here she learned the doctors were unsure whether she would survive this.

“I was like ‘so you’ve more or less handed me a stopwatch here and told me run on with your life, I might press stop at some point,’” said Scholes.

“So at that point it was almost like a wake-up call. I was like, right, so I have God knows how long and it was sort of make the most of everything because you don’t know what’s going to happen.” 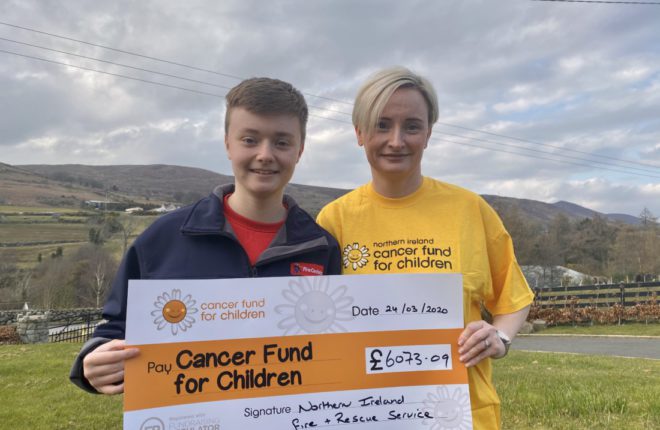 PUTTING SOMETHING BACK…Leah and her mother Cathy doing the campaign pictures for Cancer Fund for Children. She did a fundraising car wash with Newry FireCadets, when she was a FireCadet from 2018 to 2020

Scholes continued to play with her club, while her date for chemotherapy was delayed until November. She was made captain of the Rostrevor minor side ahead of their Championship campaign and inspired them to victory, game after game.

“Before I started my chemo, I was talking to my oncologist. We were about to start the Championship and I said to him: “is there any chance we can push this back so I can play?” said Scholes.

“He said: “right play your first match and see how it goes.” We won that match and then we got to the quarter-final. He said; “right Leah, can we start chemo yet?”

Scholes ended up doing eight months of chemotherapy, she was due to have four sessions but that doubled. And although her round of chemotherapy ended up lasting almost a year, it never damaged her spirits.

She went to school when she felt able and even went to training with Rostrevor, taking part in the non-contact sessions.

For now, she is tested every six months. She recently had an MRI and is awaiting the results of that while she looks ahead to her summer holidays.

“This is not even just for young girls, people in general that have a condition or an illness, people who think they can’t play football or do this or that. Maybe someone has got an injury and they are struggling to see the other side of it or come through it,” said Scholes.

“I just want to help someone get a different mindset, maybe they can do this because someone else has done something similar to what I have, or even worse than me.

“If it motivates someone or raises awareness or something like that, then it’s great.”