ANOTHER video did the rounds on social media at the weekend of a brawl at a club league game in Monaghan.

It didn’t make for good viewing and comes after scenes from the Derry championship and an underage game in Wicklow.

Before I go any further, these are in the minority and that’s very important to acknowledge.

Outside of a few, the association is a beacon of society. Stories of joy, positivity, role models and it offers structure to our youth.

The concern is how county board brush these types of incidents under the carpet. Instead, they should come out and condone them in no uncertain terms and those who have infringed the rules should be held to account, and those punishments should also be made public.

The majority, who are not involved in this, deserve better than to be tarred with the same brush.

It’s sport Jim, but not as you know it

LAST WEEK Jim McGuinness said that he isn’t in the running for the Down job after being linked with it. He said that he is focused on soccer at the moment and so wouldn’t be involved in any GAA posts. Chasing jobs in soccer ranks alongside buying scratchcards and lottery tickets. I like to buy the odd scratcher, and there’s a frisson of excitement that i might get a big pay day, but it’s never a realistic long-term prospect for making a living. A look at any of the professional soccer jobs appears to be a lifetime of high pressure. Sport should be about joy and fun with friends, and something meaningful away from the business of making a living.

THE Tyrone County board has been metaphorically beaten to a pulp as a result of their pricing strategy for the Tyrone Intermediate and Senior finals, which were played last weekend. Tyrone PRO Eugene McConnell defended the decision in an interview with the42.com, saying that the cost of living has risen generally. The problem is, that the price of a ticket was out of whack with other counties across Ireland, so it was hard for people to accept that argument. I’m sure the County Board has some regrets about the whole thing themselves – it’s not been good for PR and they probably would’ve had more people subscribing and attending the matches if prices were a bit lower, so it all would’ve balanced out in the end.

Jewel in the crown

ONE glance at the club results in recent weeks illustrates the magic of the club championships. Dromore’s Ronan ‘Lizard’ McNabb said he was happy for his former Red Hand team mates to get their hands on Sam, but club success was number one.

Ten years after he last held the O’Neill Cup, he was back in a place he may have thought he’d never visit again– the realms of the county champions.

The hugs and back slaps that greeted him on Sunday night came with a common message – ‘we’re back’ and ‘good man’ from the Dromore faithful.

The swathe of clubs bridging huge gaps without silverware, or Glen winning their first, tell us one thing – while the county scene dominates the headlines, the club scene touches everyone.

And, in an era of the split season, what the club calendar can offer is bottomless.

SO there could be a surprise return of the McKenna Cup. The Central Council of the GAA will decide this weekend whether to bring back pre season inter county competitions for 2022, and it would be major surprise if they give the go-ahead for provincial competitions to stage their pre-season competition. Sure what’s the harm? There’s a space in the calendar, teams will be back training and playing challenge matches, and it gives punters an opportunity to see how their team’s panels are shaping up. I don’t really see a massive argument against it – player burnout maybe? That ‘nobody cares’ about the McKenna Cup? Eh, everyone’s entitled to their opinion but money’s the bottom line so they’ll probably be back early in the new year.

CREGGAN’S Antrim Senior Football Championship win last weekend was superb for the club as they had long waited for that success in the big ball game. They are a club that had started the u-21 tournament over a decade ago, based on their success at that level. But the win adds support to the argument that clubs can compete in both codes and be successful. Creggan have a very good hurling team and while they may not play senior level, their hurling remains important. Similarly, St Eunan’s also won both senior hurling and football titles this season. Yes it is not easy to do, but that’s more to do with fixtures than to do with personnel. 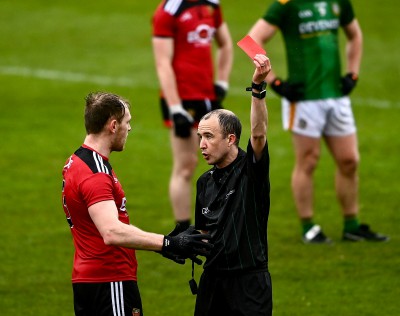 23 May 2021; Gerard McGovern of Down is shown a red card by referee Niall Cullen during the Allianz Football League Division 2 North Round 2 match between Down and Meath at Athletic Grounds in Armagh. Photo by David FitzgeraldSportsfile