THE Antrim camogs are playing in the All-Ireland final on Sunday, but unfortunately the game is on the same day of club championship hurling. It’s a difficult situation for the fixture makers, we all know that. In the past I’ve had messages from officials in Antrim who have said to me that it is very hard to balance everything that is going on in the county. There are a good amount of people who would have gone to both the camogie and the club hurling. The news came yesterday that the county board have switched the time of the Loughgiel game, which will have been welcomed. But the issue still remains, Antrim find it very hard to get all their fixtures in without overlap, and that happens with mens football and hurling, as well as camogie. A split season is coming for club and county, but should it happen with hurling and football, and could it even happen with camogie?

OUR columnist Joe Brolly got a fair bit of criticism for having a cut at Aidan O’Shea for doing a recent interview with Sunday World magazine. The interview came on the weekend of Tyrone’s All-Ireland semi-final victory over Kerry, and with the juicy angle of his girlfriend being from the Kingdom, went to print almost assuming that Mayo would play Kerry in the All-Ireland final. In fairness to Aidan, the interview may have been done a while ago, but I sort of think this whole debate about whether O’Shea will play or not is a bit of an unncessary distraction for Mayo. Of course, the reality is they’re not going to leave the captain out of the starting team for the All-Ireland final if he’s fit and well, but it makes me wonder whether he should be captain in the first place. He’ll probably go out and have a stormer now…

The reason why I (sort of) think my native Tyrone is going to win the All-Ireland final in Saturday is the presence of wildcard players like Cathal McShane (who’ll likely start on the bench), Darragh Canavan and Conor McKenna, who showed his ability to pop up out of nowhere with goals against Kerry. I think the first three-quarters of the game will be a close-fought affair, but I have a hunch that the Red Hands will push for home in the final ten or 15 minutes of the contest. And yes, Mayo showed remarkable conditioning levels against Dublin in the semi-final, but they seemed happy to conserve their energy levels in the first half. In saying that, I could make an argument for Mayo as well – many of their young players have come through successful u-21 teams, which is usually a positive omen, but I’ve a notion they may have to wait another year or two to end their curse.

CONOR Meyler is finally getting the credit he deserves, and I’m glad to see it because he is a player I have always admired. He has many strings to his bow, but his ability to shut down quality opposition has proven huge at club and county level. I remember watching him annoy the hell out of Crossmaglen’s Aaron Kernan when the latter came on late as Omagh claimed an Ulster Club win seven years ago. The Armagh man is unflappable usually but it was one of the only times I saw him and thought he had been knocked out of his mental zone by a direct opponent. Meyler did likewise against Kerry’s Paudie Clifford, who would have been in the running for Player of the Year had he won his duel and the Kingdom had progressed. Instead it’s Meyler who could end up winning it if he has a massive final.

SOMEWHERE in Tyrone, there is a factory dedicted to creating Peter Harte clones. When I look at the way Frank Burns, Kieran McGeary, and Conor Meyler play the game of football, I think of Peter Harte. Those lads are hardy bucks, square-headed, no-nonsense footballers, who turn the ball over but don’t get turned over themselves. Peter Harte always struck me as an emotionless footballer, unaffected by the drama going on around him. He’s there to get the job done, and as he approaches retirement age, or whenever the duracell batteries run out, I wondered what would become of Tyrone. But I know, they just went to the factory and ordered some of his replacement bots.

THE Senior Ladies final between Meath and Dublin was one of the most enjoyable games of the year. It was hard not to get emotionally involved as the Royals pulled ofBf one of the great football shocks, and they were fully deserving of their win. The noise at the full-time whistle was simply ridiculous. The sport is in a fantastic place at the minute and it’s hard to see it not growing further after another weekend of headlines. The camogie finals take centre stage this weekend, and they really could do with their own day of entertainment just to hang onto the ladies football coattails. 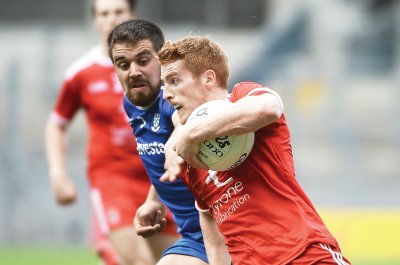