DONEGAL ladies’ manager Maxi Curran hails the advantages of his side being involved in championship double headers in their evolution.

Sunday’s Ulster semi-final with Cavan was refixed from last weekend to join up with the respective men’s teams.
Curran, who was a selector when Donegal won ‘Sam’ in 2012, recalls being involved with the ladies’ team in a double header with Tyrone in 2019 on their way to clinching a third successive title.

#The first advantage he sees is how it exposes players to more pressurised situations in front of bigger attendances.
“The more often they come through the big games and come through them, then the better they are at the end of them,” he said.

Curran feels the “poor” start they had in the League final defeat to Meath wasn’t helped the “Croke Park effect” of playing  on the big stage.

“You need to get the Croke Park thing out of your system, so if we get back later in the year we will be better from the experience of being there,” he said.

“The double header adds a wee bit of pressure on the girls, so it’s about how to play under pressure and deal with that…so you have it the locker down the line.”

Another advantage is how it improves the promotion of the game and Curran feels “more often than not” those coming along and experience ladies’ football for the first time are “hugely impressed” with what’s on offer.

The growth of the game comes from a number of different factors. Firstly he credits’ the LGFA themselves for getting TG4 and Lidl on board as championship and league sponsors.

“It has given the promotion arm of it a huge lift,” he said, who also pointing to most clubs having a “One Club” model now across all codes.

Another reason is the “awareness” of fitness and wellbeing in society, with girls not drifting away from sport like they would have in the past.

“Also, parents of families tend to take a greater interest in the welfare of their daughters’ sporting pursuits than the boys, they tend to let the boys at it.

“Whereas the girls…they are inclined to mind them a bit more and keep them at it, to be part of it…so it creates a greater awareness.” 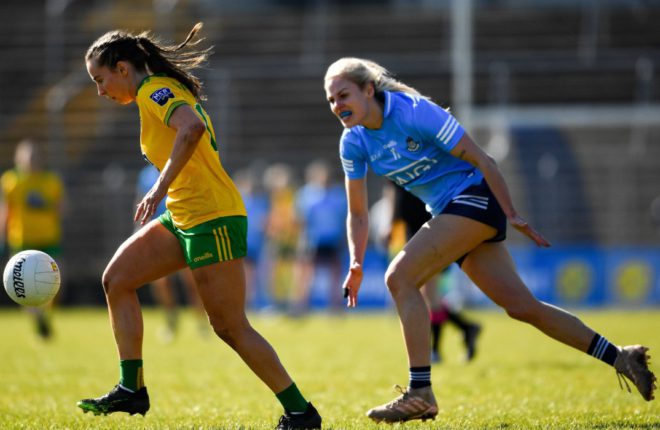 As regards the Donegal team, Curran can take plenty out of a league campaign that saw them bag to goals to sink Dublin before losing to All-Ireland champions Meath in the final.

“We got scores at the right time, that’s all it took,” he said.

“People talk about it being a monkey off your back. Prior to that, we knew we were toe to toe with Dublin. Having lost the league final by two points, we know we are not that far away from Meath either.

“You are all the time gaining confidence in going toe to toe with teams. That’s the place we are at, we are at the top table and on our day we are able to compete with anybody and the Dublin game would have verified that for us.”

Donegal won Ulster from 2017 to 2019, but opted out in 2020 and lost by a point to Armagh in last year’s final.
As they embark on a final with a youthful Cavan side, the prize of a place in the final with the Orchard County is the carrot on the stick.

“In Ulster, whether it is boys or girls, we are blessed to have a very competitive provincial championship that is highly sought after the highly regarded when you win it,” insists Curran, who gave his side a week off after the league final.

“It’s a big prize for the girls to get back to a provincial final to try and get the crown back,” he said of Sunday’s final.