A DERRY man says he is ‘humbled’ and ‘lucky’ after picking up a BBC Sports Personality of The Year Award.

Brian McGuigan is the winner of this year’s Unsung Hero Award for Northern Ireland.

A native of Dungiven, he was one of the first people to get involved in the new East Belfast GAA club that spread its wings for the first time in 2020.

McGuigan was an active member – on and off the pitch – with Kevin Lynch’s before moving to Belfast.

With an influx of new members in the East Belfast club, Brian took on the coaching of the senior hurling team leading them to their first competitive win.

He also took up the role of youth development officer looking after coaching sessions for up to 100 children, aged four to nine, from all communities and developed a new team of inexperienced coaches to take the sessions.

In the summer Brian also led a camp for kids of the same age group hosting kids from all backgrounds including children from refugee families in the area.

“It’s very humbling, but I am the lucky one,” Brian said. “I get to spend two hours a week with my heroes at the Special Olympics.”

Brian’s commitment to his clubs and children’s groups sees him regular travel between both areas while holding down a full-time job.

Brian will represent Northern Ireland as one of the 15 finalists for the overall Unsung Hero Award with the winner being announced live on BBC One at the BBC Sports Personality of the Year in December. 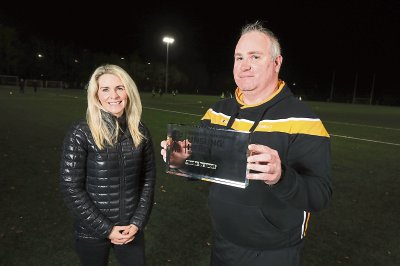