IT was the middle of March of this year that dates were being mooted for the possible reopening of club pitches throughout the North of the country. Having completed a 10-year cycle with my previous group, it was finally time to fulfil the promise made to the boss, my five-year-old son, and help to guide his 2016 (u-5) group.

Central to my plans was to assemble the best possible coaching team together. I had a few individuals in mind who I felt would create the perfect environment for this group to grow as people as much as players. Some were delighted to come on board and others took a bit of creative thinking.

One individual was particularly hesitant and felt it best that I asked elsewhere as he had no coaching experience whatsoever. I asked if he could steer a remote controlled car. His bewildered “Yes” reply was all that I needed to hear! The following Saturday he led the kids’ favourite station, The Remote Controlled Car Evasion Game.

That same coach hasn’t missed a Saturday morning these past 10 weeks! Indeed, both he and his son now create ideas for their weekly station and share videos of games they’ve created in their garden for other families to practice during the week.

Over the coming weeks I hope to share a range of games, tips and resources that will form ‘The Gaelic Life Nursery U-7 Coaching Manual.’

The column will provide detailed breakdowns of a range of games and how they can be adaptedprogressed to suit players of varying ages and at different stages in their development.

I’m also optimistic that the articles will help encourage more parents to take an active role in their children’s Gaelic games’ journey, be it through assisting with sessions at the club, practising in the back garden or simply conversing and taking an interest in this aspect of their lives.

Vitally, I will highlight some ideas that could support the pastoral and emotional needs of players within these younger age groups and some resources will be made available to help coaches and parents follow up on what they have hopefully learned from the manual.

Before delving straight into the games over the coming months, I felt that it was crucial that I used this initial article to provide a bit of context regarding the creation of these pieces.

Numbers at GAA club nurseriesfundamental groups have absolutely exploded in recent years, with parents eager for their little ones to reap the social, emotional and physical benefits that Gaelic games have to offer from the earliest opportunity possible.

Whilst this is an extremely positive reflection of where our games are headed it has also posed a number of challenges for clubs and coaches alike.

A lot of clubs, like my own, have had to adapt to a much more (if not entirely) games-based approach tailored to suit children of 4-7 years old. Creating smaller groups with a much greater coachhelper-to-player ratio has helped our players remain active for as long as possible whilst feeling supported at the same time.

Altering our use of language and how we communicate has helped to ensure that young players not only understand what we are saying but feel comfortable with the tone of voice that we use.

Lastly, moving from very technically and tactically focused sessions, to a series fun-filled learning stations and games which maximise the use of the fundamental movement skills whilst exploring their application to Gaelic games.

Sessions which have the players’ needsinterests at the core, such as creating opportunities to form friendships and promoting a sense of belonging (the poster attached outlines the feedback that I have gained from playerschildren within this age group over the years).

You can have the fastest car on the track but if the tyres are deflated and an erratic driver is behind the wheel, the likelihood of getting over the finish line will be severely hampered.

Similarly, if ultimately our finish line as coaches is ensuring that as many players as possible remain actively involved with our clubs for as long as possible then it wouldn’t matter how good the subsequent games are.

If coacheshelpers are putting constant pressure on young players, treating them like mini-adults with a heavy focus on winning and making their mistakes (learning experiences) feel like failures, will exciting stationsgames be enough to increase player retention?

If nursery and young primary school-aged children are waiting in queues for long periods of time, getting limited scoringplaying opportunities and being ordered to more than listened to, will Gaelic games seem as attractive a hobby as playing their X-Box or Playstation?

It is our duty as coaches, carers essentially, to create a fun, learning enriched, child-centred environment within our nursery-u-7 groups where every person feels valued and part of the unique family…that is their GAA club.

In next week’s column, I will share my thoughts on assembling the best kind of coaching team for nursery – u-7 groups. I will also provide some tips for maximising parent engagement whilst encouraging coaches to consider how we want our young players to feel during our practice sessions and ultimately how they feel about our club.

If you would like a FREE pdf copy of our ‘Nursery-U7’ poster, please email us at: livelearnlovegaelicgames@oulook.com

If you are seeking more information or wish to place an order for our Nursery Under 7 booklets please visit: www.livelearnlovegaelicgames.com or send us an email to the address above. 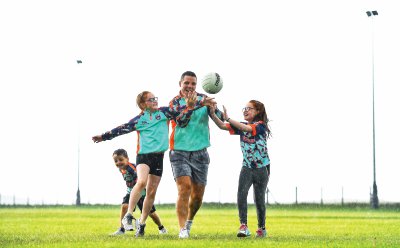 3 July 2020; Former Donegal GAA star and TG4 C˙l Camps TV show coach, Kevin Cassidy was on hand, with his children Aoife, Nia and Fionn, to launch the Kellogg’s GAA C˙l Camps on-pack competition. Kellogg, now in its ninth year sponsoring the Kellogg’s GAA C˙l Camps, has launched the nationwide on-pack promotion for all GAA clubs across the country to be in with a chance to win prizes worth Ä40,000 – their biggest on-pack prize offering ever. For more information, go to kelloggsculcamps.gaa.iecompetition. Photo by Sam BarnesSportsfile