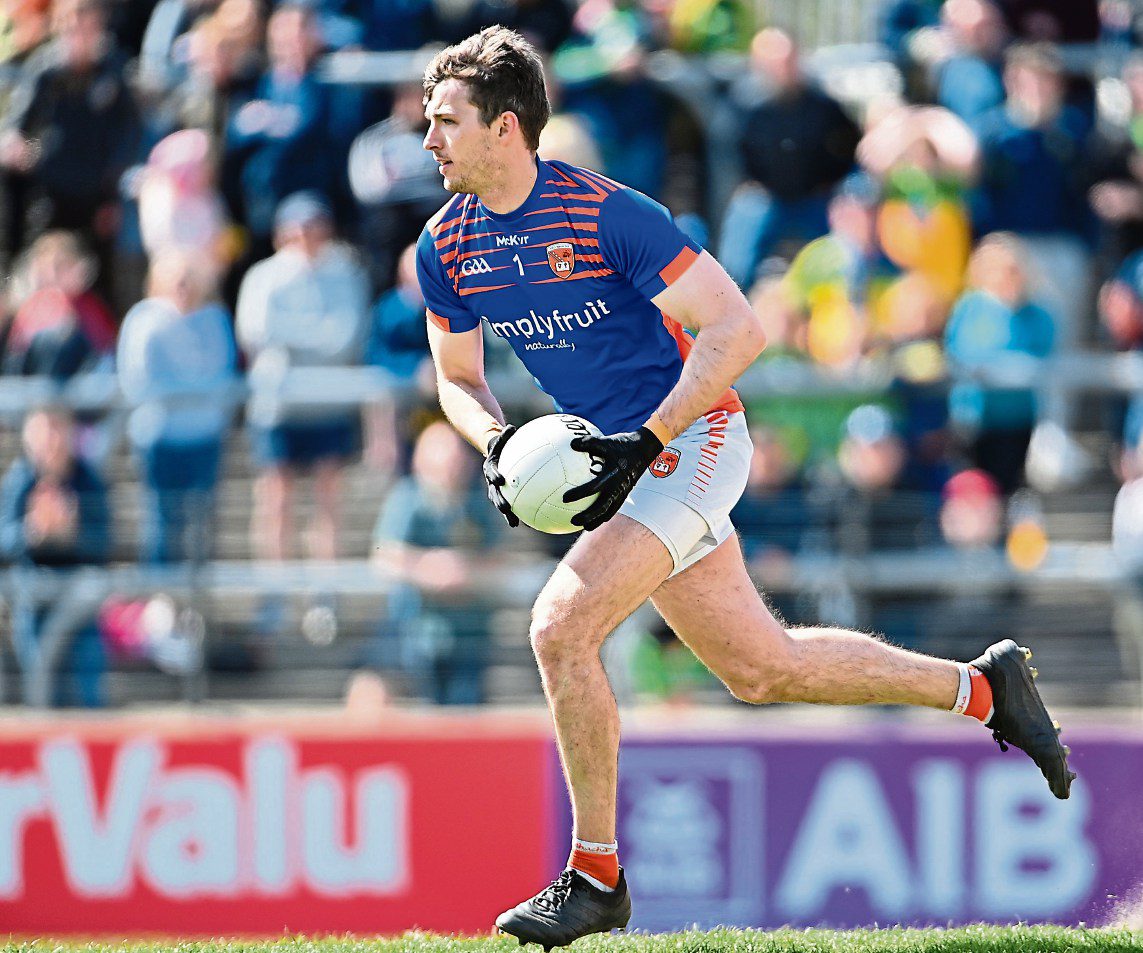 SKILLSET...Ethan Rafferty used his abilities as an outfield player to great effect against Tyrone

MY good friend Ethan Rafferty gave an exhibition on how the modern goalkeeper is evolving in his performance last Sunday versus All-Ireland champions Tyrone. He gave a top-drawer performance chipping in with two fantastic points, gaining him a spot on the GAA Team of the Week as well as a Player of the Week nomination. Ethan has transitioned well into his new role within the Armagh team and although not the finished article at present, he is developing into a potent weapon for the Orchard County.

During an interview with The Sideline Eye, an independent sports media outlet, Rafferty said that Geezer had approached him after he returned from a cruciate ligament injury and enquired about him trying out the goalkeeper role.

It certainly would not be the first time Kieran has placed an outfield player between the sticks (Paul Courtney v Cavan 2016) and thinking back most of the goalkeepers that played under McGeeney have all vast experience playing outfield for their respective clubs (Blaine Hughes; Mattie McNeice; Niall Geoghegan). I myself played midfield until I was 24 and then made my county debut for Armagh the day before my 31st birthday.

The key point to be taken for modern day goalkeepers – and for the coaches that are mentoring them – is that they need to be more and more comfortable when in possession of the football. In years gone by goalkeepers were very rarely given the ball almost to the point whereby defenders would rather over-carry than use their goalkeeper as an outlet ball. In the past there would have been audible gasps of panic when the goalkeeper received the ball within their own penalty area.

Nowadays goalkeepers have become more accustomed to receiving the ball and joining the fray. You may even say that they have become expected to in some cases. It has and is becoming more and more evident that the ‘fly goalie’ phenomenon is here to stay and as such it is something that needs to be nurtured in the correct way in order for it to flourish.

The very first action that needs to be taken is acceptance. Those who feel that it is an unnecessary evil of the game andor that it is taking it away from the way football used to be played in bygone years need to realise that their memory of how football should be played are just that – memories.

At the current rate our game of Gaelic football is evolving and changing every two to three years at most. Some teams are evolving every year to ensure they stay ahead of the curve.

With this in mind, clubs and counties nationwide need to begin to incorporate ball carrying into their goalkeeping training and development beginning at the youth levels. I would suggest that up until the u-15 age group that there is no need to play with goalkeepers because children before this age have not developed enough physically and mentally to play the position as effectively as they could. This would allow for any potential future goalkeepers to gain outfield experience in their formative years that will act as a base for their ball carrying abilities.

As goalkeepers develop and their coaching becomes more goalkeeper specific it will be important for them to have ball-carrying exercises incorporated into their training programs – individual exercises that they can perform by themselves as well as exercises involving other team members andor groups.

It will be essential that any ball carrying drills are relevant to the game itself and mirror the difficulty and the intensity that they are capable of handling competently. Do not expect your goalkeepers to perform above their level before they can because this can have a negative impact on their development.

As the coach your role is not to encourage or discourage the extent to which they leave their goal area and join the attack. Your goalkeeper will naturally gauge how far ‘they’ are comfortable coming out with the ball or supporting their teammates.

By forcing either restriction on them can make them feel either uncomfortable or restricted respectively. Trust their ability and also their judgment especially when mistakes are made, and disaster happens. Remember if they feel you are second guessing them it will affect their confidence and therefore their performance.

The goalkeeper position is ever-evolving and in two to three years’ time we will again see another change in what these Gaelic football specialists can perform and will be expected to perform. In Ethan’s interview with Shaun Casey, he explained that he had been working hard in training to better his ability as a goalkeeper and from this admission comes the most important part of this article. If you want to play the way you train, you must first of all ‘Train How You Play!’