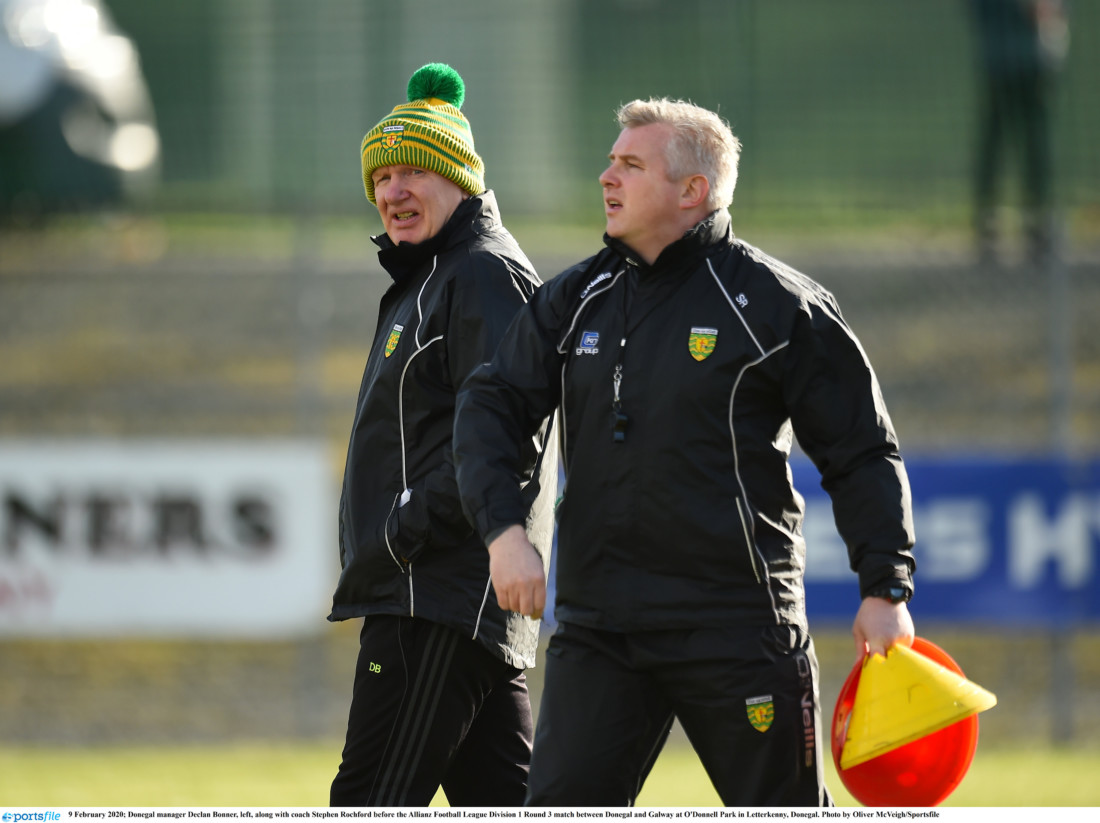 9 February 2020; Donegal manager Declan Bonner, left, along with coach Stephen Rochford before the Allianz Football League Division 1 Round 3 match between Donegal and Galway at O'Donnell Park in Letterkenny, Donegal. Photo by Oliver McVeigh/Sportsfile

ON Monday night past, Stephen Rochford, the current Donegal coach, delivered a webinar for Louth GAA with the title ‘Positive Decision Making in Possession.’

There were some great take-home messages from it with Stephen explaining how important possession has become in the modern game but, more importantly, what you do with possession.

He reemphasised the importance of focusing on coaching and improving the basics of the game at all levels and showed some drills and games on how you could harness this. He looked at different patterns of offensive play that had involved his teams, but as he put it, you try and work what is best for the group of players you have in front of you.

I feel in the modern game both at club and at county level there is this huge emphasis placed on conditioning and we sometimes lose sight of the most important aspects and skills of our game, especially at underage level.

We can get a little consumed with dragging or pushing weights around the field and competing to see how much we can all bench, press or squat. It’s also important to not lose sight of the skills of Gaelic football.

There are many skills in Gaelic football – ball skills, the pick-up, the hand-pass, the kick pass, your first touch, speed, agility, multi-directional running, spatial awareness, anticipation and footwork to name a few. There are also strategies and tactics – creating space, containing space, defending a goal or attacking a goal, but probably in my opinion the most important of all, gaining and maintaining possession of the ball.

Everyone knows work-rate is all mental and when you have the ball everyone feels fresh and lively, but the hard part can be winning the ball back and it is only a mind-set. It can have a serious detrimental effect mentally and physically on players if they have to spend long periods chasing the ball.

Keeping the ball and winning it back as quickly as possibly can be nurtured and coached if your players are willing to work hard enough. Some critics may argue this aspect of team play can’t be coached and it’s either in a player or not. I strongly disagree.

Here are a number of games you can use at training to underpin both ball retention and ball acquisition and can be used from underage to senior level. Enjoy!

Two teams, eight players in both attackers and defenders. A player from the attacking team starts with a foot pass from the halfway line. They intentionally misplace a pass to the defending team’s full-back line and they now have 10 seconds to shut that ball down and acquire possession. The defending team retain possession and try to work it out past the halfway line. Shorten the time limit and make the game more intense.

Two squares on either sideline of the field, approximately 20m x 20m. Two teams, one team starts with the ball in the middle between the two squares. The team in possession have to work two passes in each square on both sides before they score. If the opposition turn the ball over they do the same. A superb game for ball retention and acquisition, and also for physically conditioning the players.

3) Give and go and get it back

Start the game with 4v3 or 5v4 depending on your numbers. One player in possession of the ball on the end-line (two groups working either side of the main goals) and the game starts with a short free-kick to one of the players who has worked to find space.

The original free-taker must get the ball back and it becomes a 4v3 exercise with the team in possession trying to work the ball out past the 45. If the opposition turn the ball over they can kick a point from outside the 21.