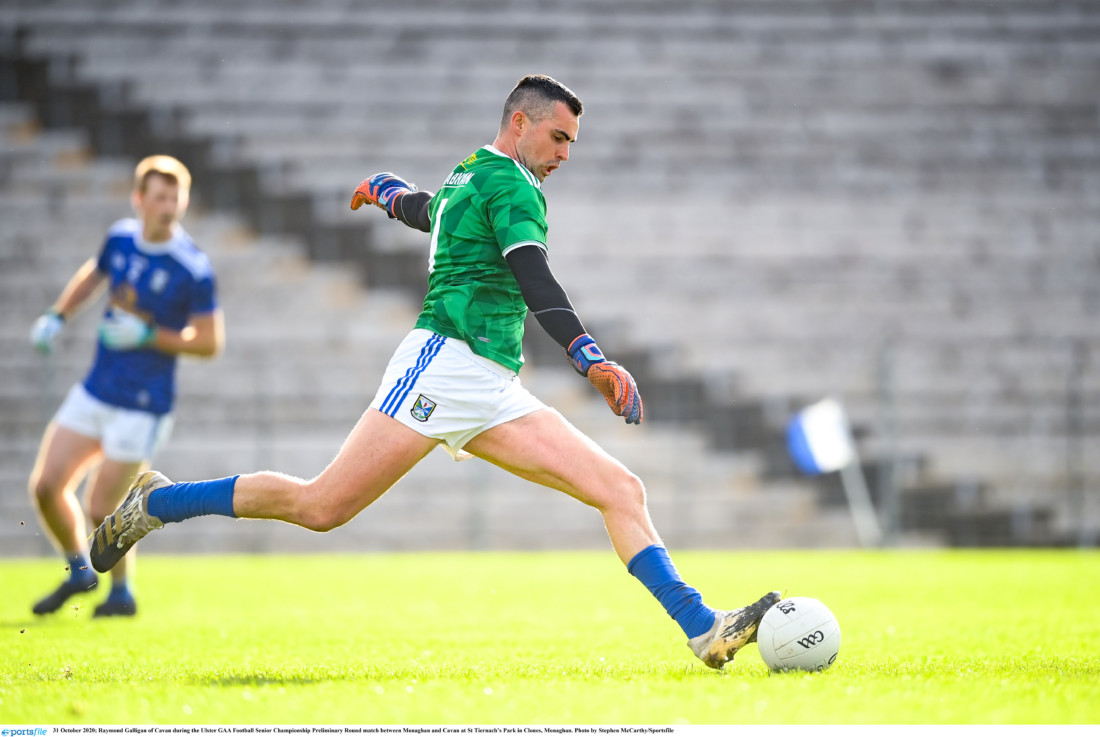 31 October 2020; Raymond Galligan of Cavan during the Ulster GAA Football Senior Championship Preliminary Round match between Monaghan and Cavan at St Tiernachs Park in Clones, Monaghan. Photo by Stephen McCarthy/Sportsfile

Last weekend saw the beginning of the Ulster championship with the games of Cavan/Monaghan, Donegal/Tyrone and Armagh/Derry.

Three fabulous matches that certainly did not disappoint in terms of scoring, entertainment, and good old-fashioned championship gusto.

The straight knockout format really came to the fore as all teams battled right to the death and their efforts were ferocious in each of these games.

Armagh’s win over Derry and Donegal’s win over Tyrone were both staying with the grain in terms of expected wins but their wins were by no means straight forward. Both had very difficult opponents with Donegal having to come back from behind to overcome Tyrone. Armagh built a good strong halftime lead but a second half surge from Derry was almost enough to catch the Orchardmen in Celtic Park. Now, both Armagh and Donegal will face off in the Ulster semi-final.

The preliminary round game between Cavan and Monaghan was as typical as an Ulster championship game as any. These two age old rivals just had a never say die attitude and fought to the death. Monaghan roared into a lead and by halftime led the Breffni men by seven points, but Cavan battled hard in the second half to end the game level at full-time. At the end of extra time and with penalties looming, Cavan eventually won the match with literally the last kick of the game.

I thoroughly enjoyed the opening weekend of the championship. But it was not just the quality of the games that had given me a giddy high of satisfaction.

It was the levels of goalkeeping that were on show from the ‘keepers over the weekend of games that made me really happy and excited about the future of the position, especially in my own personal opinions regards the evolution of the goalkeeper.

Four of the six ‘keepers gave a great insight into how the future of the position will evolve into. Raymond Galligan (Cavan), Rory Beggan (Monaghan), Shaun Patton (Donegal) and Niall Morgan (Tyrone) were all excellent for their respective teams at the weekend.

All of them played their positions very well and performed their roles perfectly. Galligan and Beggan had a ding dong battle as they both tried their very best by joining their attacks and scoring monstrous points from dead balls, with Galligan hitting the eventual winner from a massive distance.

Patton and Morgan had a similar battle but theirs was more technical in nature. Both ‘keepers were in scintillating form with their restarts with Patton hitting an absolute peach of an over-the-top pass that lead to Donegal’s momentum swinging goal.

Morgan regularly beat the Donegal high press with his precision kicking off both his right and left boots. Even though there had been a rule introduced to stop the goalkeeper receiving the ball back from a restart, Tyrone have, whether intentionally or not, found a way around the rule.

I noticed that on the majority of Tyrone’s short restarts to either of the corner backs, they would always immediately have a support player off the shoulder who usually received the ball moving back across their own goal.

This brought Morgan back into play allowing Tyrone to keep their attacking option from Morgan who would immediately look for the gap and penetrate it at high speed to draw the man for an overlap.

I have often written about how I have thought the position will look like in the future and the combination of how these four men played is only the start of what I am predicting. Do not be in any way surprised when we see a rise in the amount of goalkeepers that are comfortable with being in possession of the ball regularly carrying the ball out of defence but also regularly being found in the attacking third of the field either on the ball or as a support player.

With the goalkeeper venturing into the opposing teams half more regularly, more energy will be placed on strategies to cover the goalkeeper while they have vacated their crease. One strategy you may begin to see is having the full back line drop into the goal until the goalkeeper can get back and relieve them to resume their defensive duties.

For this to be as effective as possible it will be prudent to have the full back line complete specific goalkeeping training on a regular basis.

The training they may receive would be specifically one v one training, effective communication, correct diving technique as well as tactical awareness, game commentary and pattern recognition which will although to protect the goal more efficiently.

The goalkeeper will of course try and return to their goal as quickly as possible but in instances where they get involved within the play they will need to have trained in the necessary skills to perform their defensive duties.

As players drop back to cover the goalkeeper’s advance, the ‘keeper may need to perform marking duties or fulfil a defensive role until a break in play allows them to return to their goal.

There is no doubt that the array of abilities that a goalkeeper is expected to perform during a game has risen rapidly over the past 20 years. Over the next 20  years I am predicting that the expectations of the goalkeeping position will evolve even further with ‘keepers requiring further abilities or to retrain ones they didn’t use as much before. the signs are there for the evolution of the position and for me as both a player and a coach I find it an exciting time to be able to try and contribute to this progression.