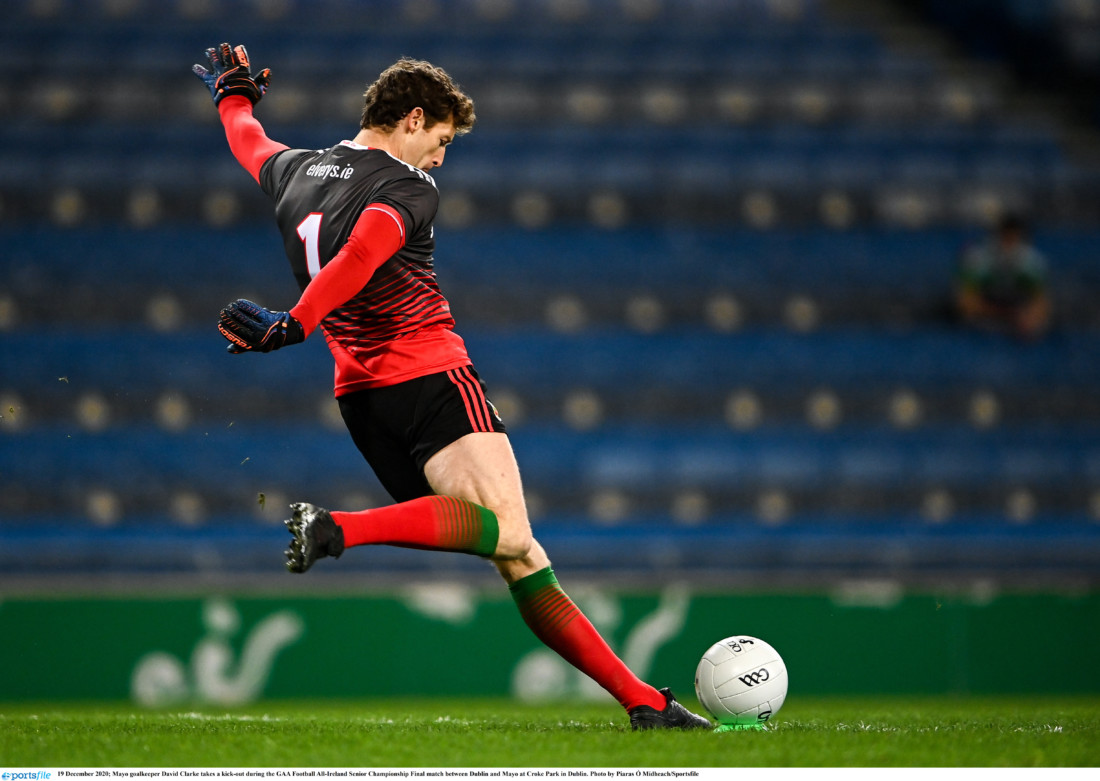 GAELIC football has evolved so much since 1884, and no position more so than the goalkeeper position. The array of skills that a goalkeeper has harnessed and developed over the years has grown exponentially.

From shot-stopping to sweeper ‘keeper; free taker to playmaker, goalkeepers in the modern game really have established a specialised skill set. Another skill that has become ever more important for a modern-day goalkeeper is kicking consistently. Whether it be from restarts or dead ball place kicking the emphasis on this aspect of goalkeeping has become one of, if not, thee most important skill a keeper has in their locker.

To become elite in this area of their game a goalkeeper must spend hours of concentrated practice to ensure their kicking is at the highest possible level. They must also ensure that they have a consistent kicking technique/routine that they follow for every kick they take. This means that if misplaced kicks occur or issues arise, they can be analysed easily, and the keeper can go through their technique systematically ‘feeling’ for errors. Once the defective part of their technique is identified, it can be focused on for the next kick the keeper has to make.

Players like Stephen Cluxton, Rory Beggan (GAA); Johnny Wilkinson, Johnny Sexton (Rugby Union) Cristiano Ronaldo, Hope Solo (Soccer) and Adam Vinatieri (NFL) will all have their own personal kicking techniques that they follow every time that they kick the ball. In the late 1990s, I attended a kicking workshop organised by my father and conducted by legendary kicking coach Dave Alred who has worked with the world’s best place-kickers.

During the workshop Dave taught us the four stages of kicking and detailed all the necessary components of each stage. Breaking the kick down into these stages allows the kicker to effectively analyse their kicking by creating a process for them to follow. The four stages that he discussed are:

The first stage is the ‘Lead Into’ the ball. The number of steps a goalkeeper takes before striking the ball is not what generates the power of the kick.

What is important though, is that they take a quick last step towards the ball and a strong foot plant from their non-kicking foot making sure that it is planted next to the ball not in front or behind where the ball is placed. The planted foot MUST always point towards your target. The hips should be slightly offset and the shoulder above the standing leg needs to be kept slightly forward, this assists with the generation of power.

From there, the kicking leg moves through the ball into the second stage which is the ‘Ball Strike.’ The ball is struck with through the laces of the boot and the contact point on the ball is slightly off-centre as the toes will always wrap around the ball to the centre.

Aiming the ball involves picturing your target by looking directly at it and by focusing on it enough. This picture then transfers into your mind’s eye. Once you have  this internal targeting system it’s vital you ensure your body is kept ‘Chest On’, facing your intended target. Wherever your chest and shoulders face is where your kick is going end up. To ensure that you stay Chest On it is also vital that you keep your ‘Head Locked’ down, chin to chest, until after you have planted your kicking foot back onto the ground. Lifting your head up too early will unlock your shoulders allowing them to veer off target.

The fourth and final stage is the ‘Follow Through,’ generating power via weight transfer. If you imagine the area on your body from your hips up to your shoulders as a ‘pillar,’ it MUST move in parallel to the flight of the ball transferring your body weight through the ball, finishing ahead of where the ball was kicked from. So many kickers have a tendency to quit transferring their weight which means they are kicking with just the leg resulting in misplaced kicking. Always kick through the ball.

Keeping this four-phase framework as your kicking template will allow you to both improve your kicking accuracy as well as making it easier to rectify any defects that may develop. There are also a number of other important tips to remember whenever you are practicing or coaching kicking.

Confidence is key when you are kicking. It is vital you are confident that you can kick the ball to where you want it to go.

Distance (Rotation) is created by a quick last step into the ball, strong foot plant and how fast the kicking leg is pulled through the ball. All three are generated by the rotation of the hips and as you increase the rotation of the hips it affects the accuracy of your kick. Accuracy (Flexion) is created by limiting the amount of rotation which is generated through the body. This is done by keeping your body front on and does limit the distance/range of your kick.

The ultimate skill is being able to combine both of these components consistently to produce a favourable outcome.

When stepping up to kick the ball, the goalkeeper’s focus must be on the process and never on the outcome. It is important to understand that focusing on the process and ensuring that all four stages of your kick are executed effectively, is the only means by which the outcome can be controlled. Having your own kicking techniques and practicing them meticulously transforms them into habits.

This is why it is very important to make sure your kicking habits are good, so that you can then ‘Kick Your Habit!’