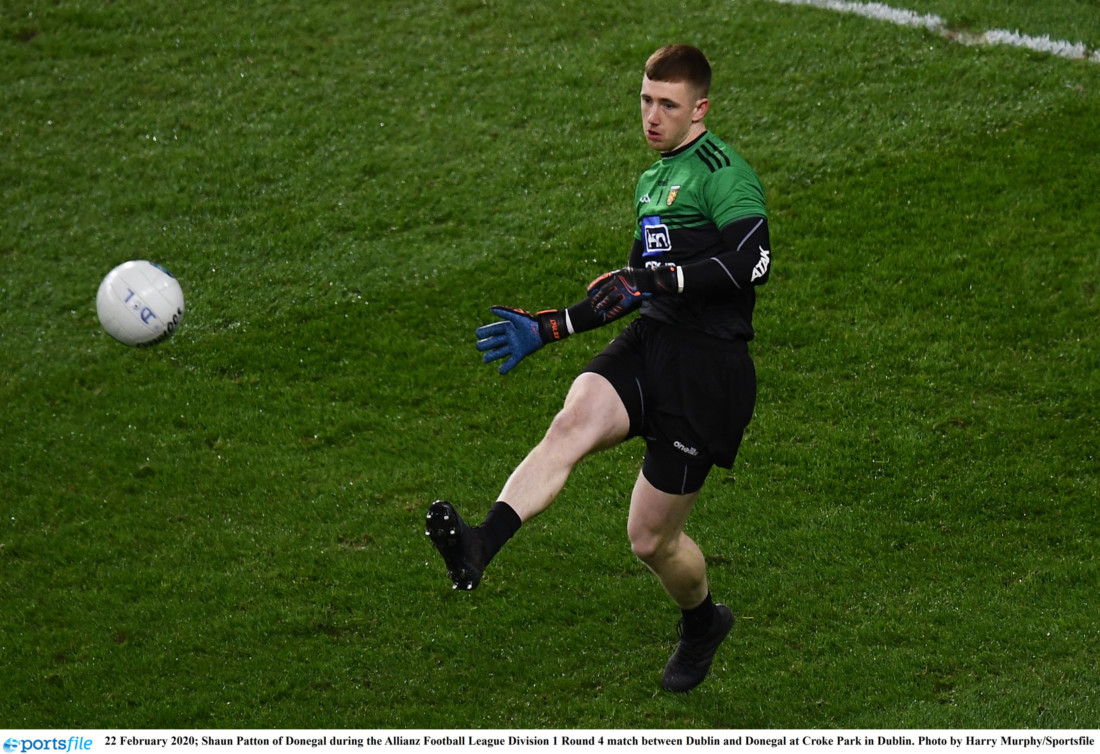 22 February 2020; Shaun Patton of Donegal during the Allianz Football League Division 1 Round 4 match between Dublin and Donegal at Croke Park in Dublin. Photo by Harry Murphy/Sportsfile

LAST weekend Cavan created the second of two championship upsets within hours of one another. With Tipperary beating Cork on Sunday, the Dubs winning on Saturday night and Mayo already safely through to the All-Ireland semi-final stage, it meant that history had been repeated as these are the same four teams that reached the semi-finals back in 1920.

It was even more poignant when you also realise that the pairing of Cavan/Dublin and Tipp/Mayo are the exact same pairings of 100 years ago. The ghosts of 1920 where definitely with us to commemorate Bloody Sunday last weekend and in some ways, it may have been their way of reminding us that they will always be with us.

For Cavan and Tipperary I am sure that they will say they were not pinning their hopes on the ghosts of the past but instead put Trojan work into preparing themselves as best they possibly could to overcome their apparently insurmountable tasks.

Indeed, almost everyone had written both these teams off and indeed all had but banished them from the competition in regard to their chances of winning their respective provincial titles. For Cavan (23 years) and Tipperary (85 years), I am sure proving their critics wrong made their wins all the more sweeter.

Special mention to groundsman Ronan Hart for having the Armagh pitch in immaculate condition for the final, some excellent work took place over the week to have the field in top condition for the showpiece of the Ulster fixture calendar.

One of the pivotal moments of the Ulster final was the goal scored by Cavan in the dying embers of the game. It virtually ensured that they would not be caught with less than four minutes of injury time to go. It sealed the game for Cavan but it in no way lost the game for Donegal as the game was already slipping away from the reigning Ulster champions.

From the weekend I have once again been in discussion with many people both in person and on social media in regard to the incident. It has symmetry to the Kerry-Cork game whereby a high ball played into the goalkeeper’s crease resulted in a late winning goal for the opposition. The difference being this time Shaun Patton came for the ball whereas Shane Ryan (Kerry) did not.

Whenever incidents like this happen it, where there is a detrimental outcome, it becomes a hot topic to discuss as to whether or not the goalkeeper should come and deal with the high ball or not.

Before becoming a goalkeeper, I played at midfield and full-forward up until 24 giving me vast experience at claiming high balls under pressure and/or contact. As a goalkeeper dealing with high balls into your square is vastly different to the pressures when dealing with them outfield. Having said that, dealing with a high ball is of course the simple act of performing an action to a desired purpose.

I was being asked about the incident and how did I think Patton should have dealt with it. Was he right to come? Was his start position right? Should he have punched? Should he have caught the ball? My answer, when I gave it, surprised people. I don’t know!

So, by this rationale, the only person that could know the answers to these questions is Shaun Patton himself. We, the spectators, can only speculate about what could/should have been done in this situation and by virtue of hindsight we can offer our noblest of advice to Patton and other ’keepers nationwide.

Only Patton can know the intrinsic factors he was feeling at that time and with such a microcosm of time to make an informed decision instinct overrides any form of rational thought. This is why your innate habits must be trained and trained repetitively so when instinct takes over you optimise your performance of skill execution.

It had been mentioned that because Patton decided to punch the ball instead of catching when he had a ‘free catch,’ showed a lack of confidence. My argument here is free catches simply do not exist. Patton was free from contact of other players, but he was not totally free from the many extrinsic, intrinsic, environmental, consequential factors and past experiences that all add to alleviate the importance of a positive outcome.

From a coaching perspective to ensure the best possible outcome in these situations, they must be training repetitively during team and individual goalkeeper specific sessions. This means everything must be replicated and not completing high balls without any specific game related stresses applied. You will need to train under the pressure of consequences, fully opposed to the extent of be tipped or knocked in the air or by putting yourself into those situations you feel least confident in (face your fears).

It will also be essential to reduce your decision-making time as much as possible so as to allow you to develop the best possible habits in these situations.

This will mean that when instinct overrides your rational thinking, you will execute your high ball skills as effectively as possible.

Confidence can only be gained through doing. If a goalkeeper is not confident in performing a certain skill, it is usually due to the fact they have not trained it at all or enough. So, to gain more confidence in that skill the goalkeeper must train the skill until their confidence grows. Without this the ‘keeper will only become deflated and will increase their own self-doubt as well as increase their self-criticism resulting in a loss of confidence and ultimately their performance.

This is why it is vital to ‘Replicate not Castigate!’