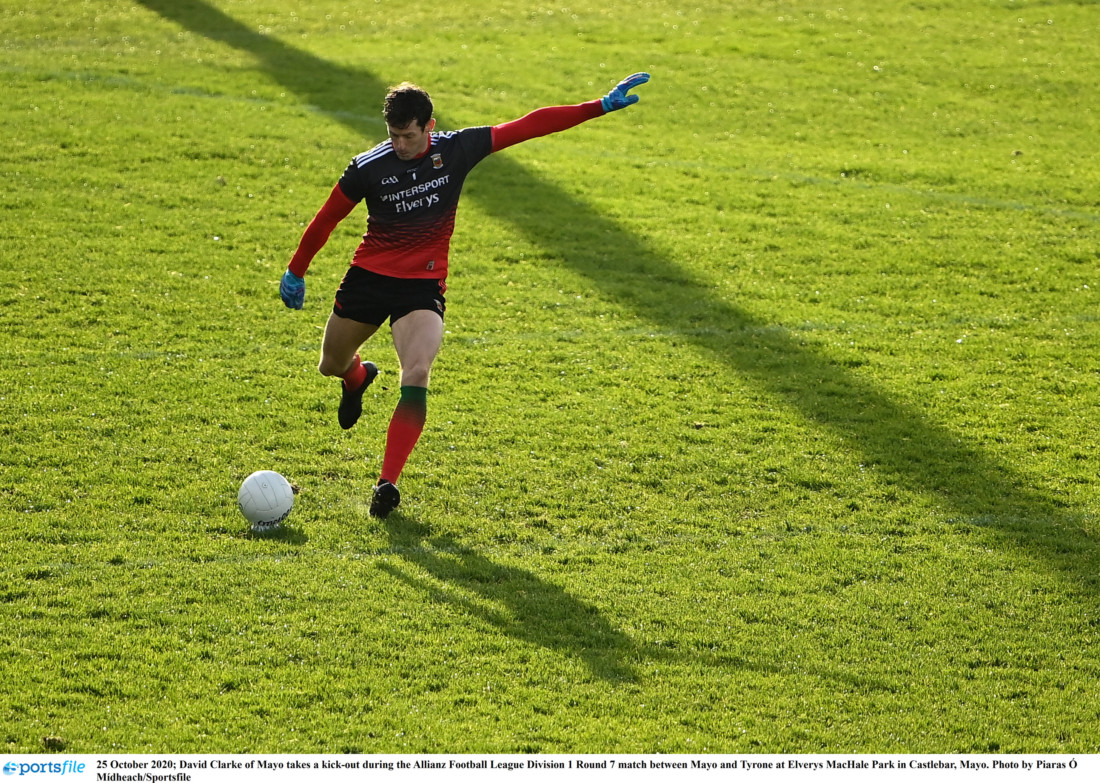 25 October 2020; David Clarke of Mayo takes a kick-out during the Allianz Football League Division 1 Round 7 match between Mayo and Tyrone at Elverys MacHale Park in Castlebar, Mayo. Photo by Piaras Ó Mídheach/Sportsfile

THIS weekend will see the culmination of the most disjointed of GAA seasons in living memory when the All-Ireland Football final takes place on Saturday between familiar foes Mayo and reigning champions Dublin. Previous meetings between these two counties in All-Ireland finals have produced some epic games but the question this year mostly surrounds if Mayo can handle the all-conquering Dubs.

Dublin are the overwhelming favourites going into the game and rightly so as they have once again swept all before them in their path toward a sixth title in-a-row.

Putting the resources/population argument to one side, it is evident that the players Dublin are far superior in terms of athleticism, quality, and consistency than any other team in the country. The fact that Brian Fenton has never lost a championship match since joining the team speaks for itself. Simply put, Dublin know how to win!

First of all, they do not view these as opposition restarts but view them as another source to provide scores for their own tally. It is clear to see that they pressure their opponents restarts as much as they possibly can with the purpose of increasing the pressure the opposition is under. By increasing this pressure, they aim to create opposition mistakes or to present a more favourable restart that they can overturn or take full advantage of to produce a score.

How do they do this? They do this with their ferocious full court press that hems teams into their own half and stifles any chance that they have of moving into the Dublin half of the field. Depending on current field position when they press an opposition restart, they usually line out in one of two ways: lined up as 4-4-3 or as 4-3-4.

Once the ball enters the play, they attack it and hunt down the ball with everything that they have got. By doing this it places immense pressure on the ballcarrier to make the optimal decision in a severely reduced timeframe. By reducing the amount of time for opposition players to make decisions it allows the Dubs to capitalise on mistakes made by those opposition players who do not or cannot perform effectively in this situation.

Much of the questions surrounding David Clarke and the Mayo restarts this weekend will of course focus on how they will counteract the deadly Dublin press. It will be one of the intriguing sub-plots of this final and for me personally I will be very interested in what Mayo will use to beat this press. For me, there is only one way in which to beat the press. Replication.

For any team wanting to beat the most arduous restart presses, it is crucial that they replicate that which they are about to face. This may seem obvious, but it is amazing at how much this would be neglected or taken for granted by teams all over the country. By completing it in the fortnight leading up to the game simply is not enough. For a team like Dublin, executing this press is like breathing. They could perform it with their eyes closed as it is clear to see that their press has been religiously trained to the point that it has become autonomous. Here are a few more thoughts in regard to beating the restart press.

In order to beat autonomy, you must become autonomous and with that statement comes the realisation of just how much work needs to be completed on beating the press. Working on set restart routines is fine but when faced with a rigorous press they can be very counterproductive as their predictability can cause them to be turned over.

“Flowing water does not go stale,” and as such your team must be fluid on every restart to vastly increase the probability of winning the kick. By staying static in a press situation, it only serves to better the oppositions chances of overturning your possession.

Space cannot be marked; it can be moved but it cannot be marked. What I mean here is that if the opposition move a player into an area to mark space essentially all they have done is moved that space to a different area of the field. On the field of play, due to the dimensions of the pitch it is impossible for one team or the other to mark every space on the pitch and as such space cannot be marked, only moved around. The team applying the full court press should want to move that space to an area that favours them best. While the team with the restart is aiming to optimise the space that has been left by the team applying the press.

Beating Dublin’s press this Sunday will be no mean feat and it sure as hell will not work unless it has been relentlessly trained beforehand. No team can hope to beat any type of restart press without having trained it first.

Nothing that we learned to do is ever completed on the first try (riding a bike, swimming) it takes time and practice to master the skills required to complete the task being performed. I wait in anticipation to see how Mayo have planned to ‘Beat the Press.’