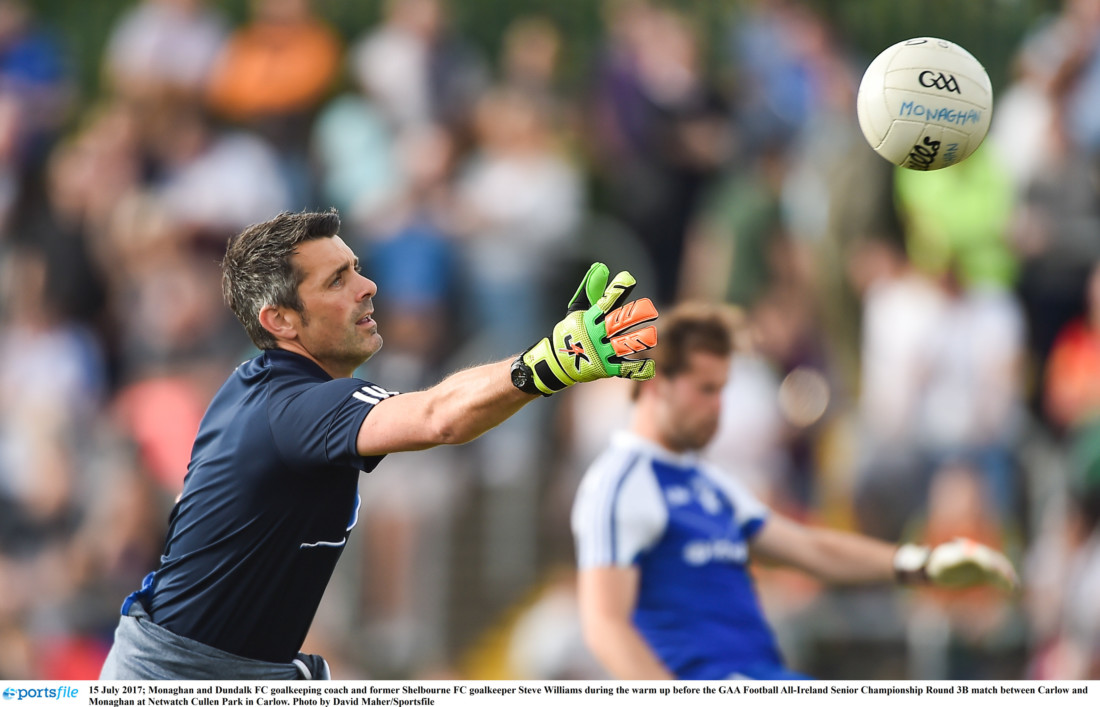 15 July 2017; Monaghan and Dundalk FC goalkeeping coach and former Shelbourne FC goalkeeper Steve Williams during the warm up before the GAA Football All-Ireland Senior Championship Round 3B match between Carlow and Monaghan at Netwatch Cullen Park in Carlow. Photo by David Maher/Sportsfile

IN a previous article I had focused on how teams need to put more concerted efforts into providing adequate structures in place in regard to their goalkeepers and more specifically their youth goalkeepers.

The main focus of that article highlighted the main components in a step-by-step format in an attempt to allow clubs and/or goalkeeping coaches to instigate the formation of a goalkeeping  school within their club/county/team.

After that article, I did receive emails and phone calls explaining that they were in the process of setting something like this up for their club/county and were looking for any advice or guidance that I could offer them.

The majority of these contacts were in the very infancy of their plans and some had already gone as far as to create the hierarchical coaching structure for it to run efficiently.

These teams were waiting for the change in government protocols so they could put their plans into actions and were looking more for ideas for training and advice on what training would need to be trained by certain ages.

It was very heart warming at the time to see that there were teams out there trying to implement structures for their goalkeepers. The people taking charge were usually ex-goalkeepers who never had any formal goalkeeping training when they were young and going through their formative years as a goalkeeper. But now they had a wealth of experience in regard to playing the position and wanted to pass on what they had taught themselves over their years playing as a goalkeeper.

Simply put, this is all that is required of you as a coach. Every goalkeeper with have their own unique goalkeeping style, even if they are left to their own devices and have to teach themselves. No two goalkeepers will ever have the exact same style – they may share similar traits and techniques but the goalkeeping game as a whole will be different.

Ultimately, there is no right or wrong method in terms of goalkeeping coaching. Instead, look at what the goalkeeper is currently doing and how can this be improved. I have had numerous goalkeepers explain to me that what I am teaching them conflicts what they had been taught by another coach. ‘This is fine’ I tell them!

The key for you the goalkeeper is to try both methods and see which method is most comfortable for you to implement into your own game. Ultimately, if you are not comfortable performing a skill or technique in a certain way then you should not perform it in that way.

This is why it is important for every club/county to have a goalkeeping coach. In a perfect world they would be able to provide a coach for each team but at the very least they need to be providing the very minimum of one coach for all the goalkeepers within the club/county. If you want to begin to develop goalkeepers or want your goalkeepers to develop it is essential that they have a designated coach that can provide them with position specific training on a weekly basis.

One might say that’s easier said than done and from my own experiences I would not try to disagree but for me it is not a good enough reason for a club/county to simply not try. All clubs/counties have three main options when it comes to creating the coaching structures required to install a goalkeeping school for their players:

1. PROFESSIONAL COACHES – by employing professional goalkeeping coaches they can be sure they are getting the best possible coaches to run all aspects of their goalkeeping school. The downside obviously being the extra costs involved being placed onto the club/county.

3. INTERNAL COACHES – club/counties can acquire goalkeeping coaches from within, and by supporting them and providing them with as much training as possible they can try and implement the requirements for their goalkeeping school themselves. This is the most cost-effective option of the three but it does run the risk of having the least level of expertise as well as the difficulties in acquiring volunteer coaches.

In the end, the most important factor in the equation is the goalkeepers. They are the ones that need the best possible opportunities to improve their development with quality, position-specific coaching. It is therefore important for all clubs and counties to ensure that their young and upcoming goalkeeper’s needs are fully catered for or they increase the likelihood that they become ‘the Forgotten Man/Woman!’