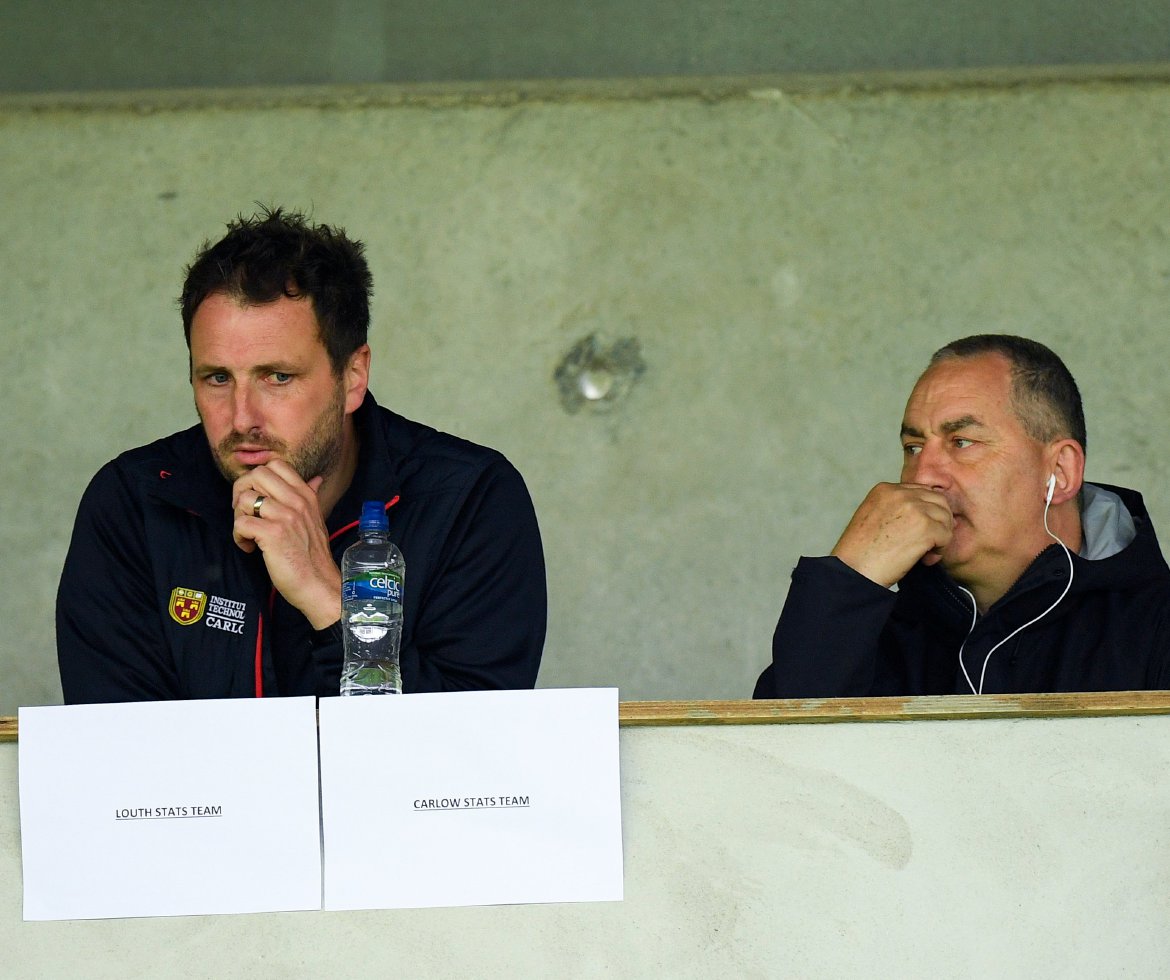 FOR THE CAUSE...Steven Poacher and Turlough O’Brien on Carlow duty

OVER the last 14 years coaching, I have been very fortunate to have accumulated a huge wealth of experience coaching through school, club and county.

For the last 21 years, I have been coaching at school level from Year 8 (u-12s) to Year 12 (u-16s). For 12 of the last 14 years, I have managed at senior club level in my own county. For the last 14 years I have also coached at inter-county level from u-15 development squads through every age group including four of the last five years at senior inter-county level, including spells in Leinster and Connacht.

Coaching is not easy, but as I have said before it’s an art form not a science. Man-management is your biggest tool. Building relationships is critical and as the great John Morrison once said, “Players don’t care what you know until they know that you care.” Too many see a career in coaching for the wrong reasons, when in fact it’s nearly a vocation – you have to have a passion for coaching and more importantly a passion for your players.

This is where the age-old adage that “good players don’t necessarily make good coaches,” comes in. Sian Beilock, a PHD professor in psychology at the University of Chicago, did an analysis and it’s true that the best players very rarely make the best coaches.

The problem is this: as a player you get better and better at what you do but your ability to communicate your understanding or to help others learn that skill often gets worse and worse.

You can actually see this very clearly in some of the podcasts you listen to now. Former players who may have a few medals in their pockets but you know they will never be successful as a coach because they tend to be dripping with condescension in their analysis of games and individuals.

Social media has changed society. Every Joe Bloggs has a platform to voice whatever opinion they want with zero consequences. For example, look at the public abuse and criticism that Andy McEntee got from his so-called own supporters, and the same for Anthony Cunningham from so-called supporters. It was shocking and it tends to come from those who have absolutely no understanding what time, effort and sacrifices that go into being a coach or a manager.

I am going to take you back pre-Covid for a sample week with Carlow. It was 2018, we had just gained promotion for the first time in 40 years and had beaten Louth by 11 points in the first round of the Leinster Championship. We were preparing for Kildare in two weeks’ time.

Less than 24 hours after beating Louth, the phone calls start with calls put in to some big coaching names, searching for information on Kildare and their insights from meeting them that particular year. This may be over two hours of calls.

John Farrelly, our stats man who was also the Georgian Rugby analyst, sends me and Turlough O’Brien, the Carlow manager, the link to Kildare’s seven National League games.

Only one is worth watching, their performance against Tyrone. Why? Because it was their best display that year and you want to see them at their best. Meanwhile the rest of the evening is spent between watching the Kildare and Tyrone game and also analysing our own game from the previous day to provide us with work-ons for the following week’s training.

I leave for Carlow just after school at approximately 3pm. It takes me two hours to travel there but those two hours are huge for making calls. Calls go out to Turlough, our S&C coach, our physio, all related to the work that evening we will be doing and who needs to pull back or recover etc.

It also gives you an opportunity to call individual players about their performance on the Sunday, things to praise them on and also areas of their game they can work on.

I land two hours before training, meet with Turlough and discuss possible match-ups and who the keys threats in Kildare are and what their energy lines are within their team. With less than two weeks to prepare every minute of the contact time you have with the group is critical.

Training is over at 9pm and we have a short meeting post training regarding the next 10 days with a short bit of tactical information on Kildare and how we will be approaching the game. Home for around 11.30pm.

An early call will be made to Turlough for a brief chat about how last night went and most importantly did we pick up any niggles from the weekend that are lingering.

This is actually one of the most important days in the preparation for the game. Continuing on from Monday’s video, it is imperative we pick out the most important aspects of Kildare’s game, areas of strength and areas we can exploit. This will be presented to the players at the following evening’s pre-training, so we can tailor the coaching session around it.

The key is not to overload the video and overwhelm players with clips, and stats etc, Players can only retain a certain amount of information and it’s so critical the message you want to get across is nailed. Five or six hours of video prep behind the scenes equates to possibly 10 to 15 minutes content max to the players. It consumes your day and evening.

A similar day to Tuesday, leaving school straight away hoping to beat the traffic on the M50. If you are unlucky, a two-hour spin could become two hours and 45 and leave you feeling agitated arriving at the training centre in Fenagh, but fortunately this only happened a handful of occasions.

The time in the car does allow phone calls to be made. One of the most important is to Ben Doyle, our physio, to make sure who is fit and able to participate in a full session tonight.

I arrive at Carlow training centre around 5.45pm for a 7.30pm session. The session tonight though starts at 7pm with video work first. We meet as a management team and go through the video work, I am presenting the video work so I run through it before the players arrive so it’s clear and precise. Training ends around 9pm and post food, and I arrive home at a similar time – 11.30pm.

We have planned to spend Saturday (tomorrow) away from Carlow and use it as a training day. Due to financial constraints etc, overnight camps aren’t an option like some of the bigger counties so we have to maximise our resources and time.

The lads are coming up to county Down and we are spending the day at a club side’s ground where we will do some video, two pitch-based sessions and some walk-through game-based scenarios, finishing up with some food before they travel home.

Planning these days is so important as you want the day to flow but most importantly you want and need the contact time to be high end quality. Friday is consumed with planning the sessions and preparing the short bit of video work that will reinforce what we are good at, with clips from the previous weekends win over Louth.

Our training camp starts at 10am. I am there 9am setting up the sessions and having our game-plan maps pinned on the changing room walls along with two tactics boards, one with our kick-out strategy in place from open play and one from set pieces.

The scenario-based coaching that morning will revolve around kick-outs, an area of strength for us but not currently of the opposition’s so we are trying to install a strategy we feel will work best against Kildare.

First session at 10am is short and sharp. More skill refinement with a small bit of speed maintenance followed with a short break for fruit and water. Second session is more coaching based with scenario work. At 1pm we break for video work, just a reinforcement of all we have been doing well, to send the players away feeling really good about themselves. Food is served at 2pm and the lads board the bus for home.

First thing, there are phone calls to start reviewing yesterday’s action and planning what we need to work on this coming week. That includes analysing the video from the scenario based stuff we filmed to see if there are any chinks or areas of strength from certain individuals.

We spend the day watching more footage of Kildare’s key men that has been broken down for us, deciding our match-ups is going to be so important because those players responsible have to be told early in the week to allow them to gain some insight into their direct opponent that weekend, because if match-ups are nailed you are a long way there to being successful.

Three of our players were named in Team of the Week last week and I make three phones calls just to congratulate them but also to just park it and retain their focus on this week. That’s a snapshot into the diary of an inter-county coach.