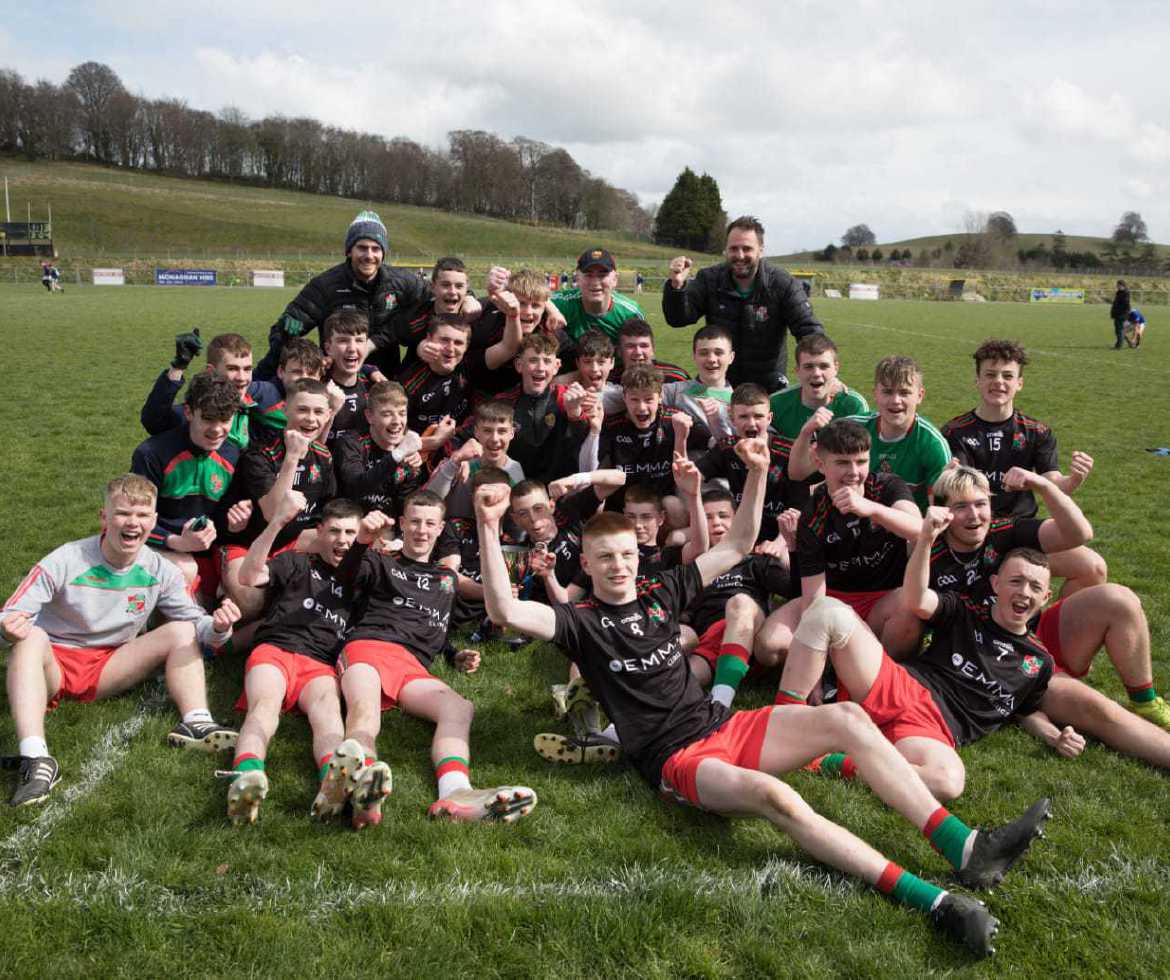 SUCCESS...St Joseph’s, Newry to celebrate their Ulster title on Friday

THIS Friday we at St Joseph’s, Newry are hosting a ‘Champions Breakfast’ in the Canal Court Hotel in the city of Newry to celebrate the recent success of our u-16 Danske Bank Mulholland Cup winning squad.

Presenting the squad with their medals and the trophy to our winning captain will be current footballer of the year Kieran McGeary. I am a proud Newry native, having been born and reared in the area, both my parents are from the city, proud Newry people. Like anyone across our island I am proud of where I am from and want to see the best for our community and especially for our young people and this is a fitting gesture to acknowledge the recent achievement of our lads.

In Newry, like any big town or city, there can be a lot of distractions for our young people. Socially it can be a minefield for a lot of our young people and it is truly fantastic to see the work that Newry Shamrocks and Newry Bosco have been putting into their underage structures over the last number of years.

As a former Newry Mitchel’s player and coach, it is very disheartening to see how the club has struggled over recent years but not having a home, a pitch or a base to not have an identity is very difficult for the club and unfortunately the underage in the club looks doomed despite the continued best interests of some hardened Gaels in the club.

I remember back to my playing days when the Mitchel’s won a Junior Championship and Division Three in the space of two years and found themselves competing in Division Two and the Intermediate Championship.

I remember clearly at the time mentioning a very unpopular opinion that Newry should have one club! For me having one club in one town, or city as it’s called now, gives you a very clear identity of who you are representing and what you are playing for.

It’s obviously probably never going to happen but for the community of Newry not to have a single Down senior county footballer in over ten years black is extremely worrying for a community of approximately 90,000 people.

After school we have a brilliant group of teachers with unique expertise within PE and beyond who allow the children to choose a number of activities, from Gaelic to golf, right through all the sports. Last year we had soccer, Gaelic football, table tennis, boxing, golf, basketball, archery and cross country – all vibrant after school activities with children encouraged to participate in as many sports as possible. But it is the GAA where my heart lies and it is a GAA ethos I want to see engrained in as many of our children as possible.

The school is fortunate it has strong feeder clubs in Newry Shamrocks, Newry Bosco, Saval, Glen, Ballyholland as well as some Armagh clubs bordering on the edges of Newry in Corrinshego, Shane O’Neill’s and Carrickcruppen.

The work in the clubs is so evident when they come to school, you can see solid foundations in the young players when they land at school and it’s a two-way street, the school needs the clubs and the clubs need the school.

It is a huge piece of the jigsaw in any young player’s development, that strong school-club link can be extremely beneficial and important.

Take Derry’s recent resurgence, a lot of people pointing the finger at Rory Gallagher and unquestionably Gallagher has had a huge amount of influence in turning the fortunes of Derry but look deeper into it and you will find a very strong vibrant culture in clubs and schools.

Schools like Maghera for example have been putting in a huge amount of work alongside Magherafelt, and this healthy culture of coaching in schools can have a serious impact on the fortunes of the county.

Take my own county here in Down, men like Barney McAleenan, PJ McGee, Tom Cunningham, Ray Morgan, all former PE teachers in every corner of Down driving Gaelic games and coaching for years and years.

These types of men are invaluable when it comes to coaching and development of Gaelic games, and some would argue are nearly irreplaceable. I have always said, children have many talents that are hidden in the classroom and for a lot of student’s days would be long and lonely without our games.