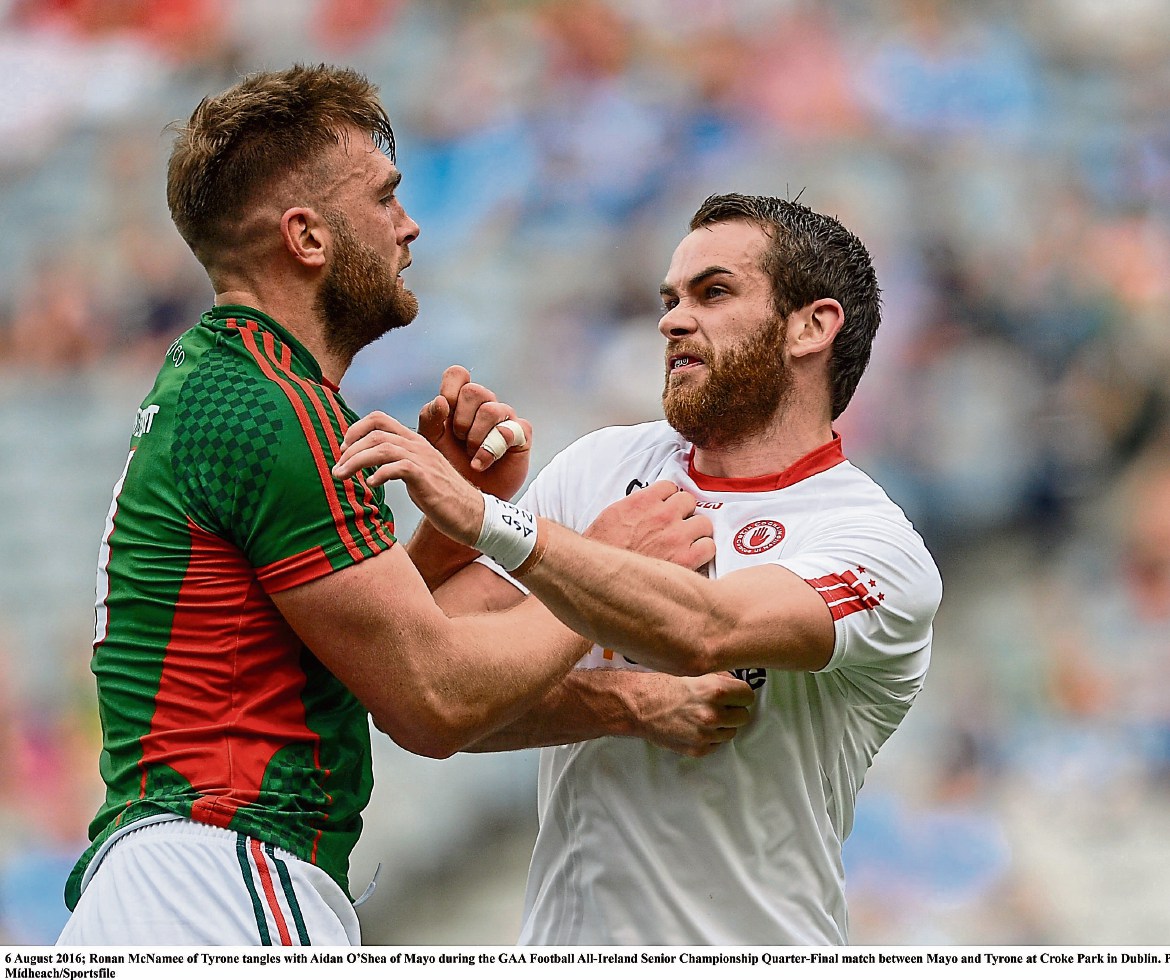 LAST week I penned an article about the importance of turnovers in the modern game and the impact they had on deciding the outcome of the All-Ireland semi-final between Tyrone and Kerry.

Tyrone for me were struggling earlier in the season an, some may argue they were going through an identity crisis as Dooher and Logan looked to put their own stamp on the team.

Initially, with McKenna, McCurry and newcomer Donaghy operating in a new-look full-forward line, the current Ulster champions had a very clearly defined strategy of kicking the ball in long and direct at nearly every opportunity.

Throughout the league this pattern of play was very obvious as the new Tyrone management team looked to nail the early narrative that this was the new Tyrone, keen to rid themselves of any association with Mickey Harte’s reign. The funny thing is, the sporadic spells of real positive football Tyrone played during the league came as a result of them running the ball, something this group of Tyrone players have always excelled in.

One tactical innovation Tyrone have employed has certainly been that of goalkeeper Niall Morgan on opposition kick outs. When a man up against Donegal in the Ulster Championship semi-final, Tyrone went very hard and aggressive on the Donegal kick out, with Morgan blocking one channel and the spare man the other on either side of Donegal’s midfielder. He really cut out the supply and launch pad for Patton to hit.

This Saturday I don’t think it’s the Mayo kick out Tyrone need to be concerned about but in fact their own. Kerry won 25 from 25 of their own kick outs against Tyrone but more worryingly also won 9 of Tyrone’s 26.

Very few teams would have been able to salvage a win in normal circumstances having coughed up so much primary possession from kick outs.

If Mayo produce the same level levels of intensity as Kerry on the kick-out, then Tyrone they might not be so fortunate this week.

Mayo have always prided themselves on pressing the opposition’s kick out – in last year’s All Ireland final versus Dublin they dismantled Cluxton’s kick outs in the first half and Durcan, Mullin, Keegan, Ruane, Coen all provide a serious platform of size and aggression in that middle third war zone.

The contrasting clash of current playing styles with and without the ball is probably what makes this final so intriguing in the build-up.

The word intensity is used quite a lot, but I would add that intensity normally happens and occurs in every game. However, these two sides are so physically well-conditioned that their ability to sustain mammoth levels of high intensity tackling makes for a fascinating encounter. As Enda McGinley recently described it on a recent podcast I shared with him, it has the potential to be “Epic!”

Neither team will drop off into a zonal defensive shape, both will press high and hard further out the pitch in the hope of negating each other’s strong powerful running players who will ultimately decide the outcome of this game in the end.

Match ups will be massively captivating. Both teams will have analysed the opposition stringently over the last 10 days and no stone will be left unturned. Mayo will need Oisin Mullin fit especially if Eoghan McLaughlin is still injured.

Not only is Mullin one of the best man markers in the game, what he provides on the front foot is priceless. The pace, power and robust running that he, Keegan, Durcan, Coen, O’Hara and the likes provide from deep is frightening at times but Tyrone showed in the semi-final win over Kerry they have fantastic flexibility in their line-up, with Meyler and Frank Burns the last day performing a tagging role on Kerry’s hard running players with extreme authority and discipline.

Tyrone and Mayo both possess warriors all throughout their team but it could be the little bit of flair and finesse that could ultimately decide this intriguing battle.

Tyrone have a serious bench, they have game changers in McShane and Canavan who caused Kerry a world of problems when they were both thrown into the fray late in the semi-final.

Tyrone can change the dynamics of their offensive unit and they have Rolls Royce ball carriers in McGeary and Harte, and their entire full-back line scored the last day out.

With the injury count mounting, one must wonder have they got the same volume of diverse changes that Tyrone can produce. Could free taking become a problem for them with the monumental loss of Cillian O Connor? Tyrone for me are going to edge this final, maybe by the minimum, I am predicting both forward lines to struggle for scores, with the large proportion of scores likely coming from both placed balls and line breaking runs from deep.

It has the makings of an epic as Enda McGinley rightly pointed out, and from a coach’s analytical view point there will undoubtedly be endless learning opportunities to be gained from it.