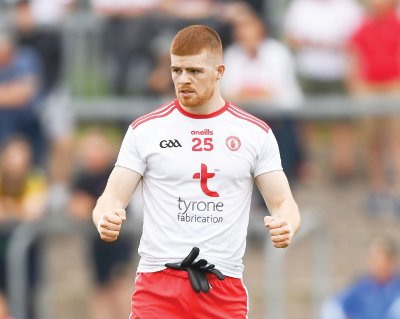 Cathal McShane excels as a target man for Tyrone

IN most games of Gaelic football nowadays moving the ball through the hands is still dominant. In fact, in an average game there can be nearly 400 hand-passes and maybe only 50 to 60 kick passes – if even that.

There is probably nearly a fear of giving possession away and this exists at all levels, but particularly at the highest level of football where so much is at stake. With the top teams now driven by data and stats you don’t want to be the player highlighted at half time for having five or six turnovers.

Even in other invasion games, for example soccer, the goalkeeper seldom kicks the ball long. It’s played short to regain possession at all costs, and teams are trying to play out from the back even when they technically maybe aren’t equipped to do that.

There was a day when the good old catch and kick or ‘route one’ football existed in Gaelic football, and you can see signs that it probably still exists to an extent now, but not to the same degree of 20 or 30 years ago.

Kick-passing is not abot getting the ball and kicking it in; it’s about the one-bounce pass or the measured ball into space, both of which are advantageous for the forward.

Soccer and rugby have both evolved too and eventually you will see signs of previous styles and strategies become fashionable again. I remember the days of Jack Charlton’s era when the grass was grown longer in the corners to allow a long ball over the top to slow up and pen the opposition in and press them high and hard!

All soccer teams are pressing high and hard now albeit with a little more flair than the Jack era because times have changed. White boots now exist in soccer and rugby and we regularly see flair players dominate in both codes.

Personally I feel it’s vitally important for a team to be able to adapt and change their playing style during a game, particularly depending on how the opposition team sets up against you.

A team who are coached to play only possession football definitely won’t be able to shift automatically to a direct style during a game and won’t be able to play penetrating football when needed. Players will hesitate on taking on those high risk bouts of play when they are really needed.

There needs to be consistent coaching regularly in order for players to become accustomed to different and various style of playing. Of course having good players and smart players can only help as their ability to change their style of play during a game or at half time can reap rewards and a more direct approach may pay off.

For me, this is simply down to excellent game management by teams and maybe having a signal or a call can trigger these penetrating moments.

Don’t get confused with the direct approach being just about lumping it into the big man. This can be a more penetrative style of attack with an injection of pace and substance to the attacks, either through the hands by running the ball or by measured kick-passing of the ball.

Here is a conditioned game you can use to help your team become more direct:

For example, if a team wins the ball from opposition in their half-back line they have 10 seconds in order to work a scoring chance.

This game will hopefully discourage sideways football and get players to act more decisively and directly, whether that is moving the ball forward or carrying it forward. It should also encourage teams to leave some depth in their attack to have an out ball if needed.

Depending on the size of field, numbers and age groups, you should vary the time limit, make the pitch smaller with smaller numbers, create various rules such as always having a point man inside, can’t pass backward, etc. The list i s endless, so you decide!