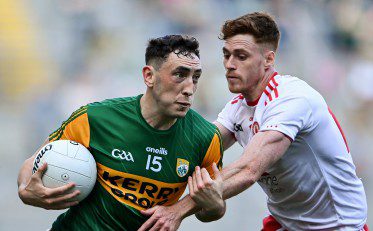 IT was great to see the provincial club championships in full flow last weekend, with the added bonus of the Leinster and Ulster Club semi-finals being broadcast on our TV channels.

It was fascinating to watch the different styles and approaches of each side throughout the course of the weekend, concluding with a titanic physical and tactical battle in the Athletic Grounds in Armagh between Kilcoo and Glen.

Both teams deployed very deep-lying, layered defences and allowed each other have long bouts of unopposed possession. Maybe for a lot of neutrals in attendance it might have seemed like a slow-burner but from an analytical point of view and a coach’s eye, it was an intriguing tactical battle that was won on the platform of really good solid defensive play.

Whether it’s a high press, a middle-third press or if you decide to drop deeper in a zona-type defence, you still must decide where will we be engaging first.

If you decide to plump for the high press, everyone must be responsible: the high level of work-rate and discipline must start at 13, 14 and 15 in your team.

If you decide to plump for the middle third press, flooding bodies into the oppositions set up zone, you must have high levels of contact and intensity in this area and tracking runners is so key.

You will have heard the terminology, match-ups, tagging or spoilers used to disrupt or negate the opposition’s most influential players – they could be the biggest scoring threats or the players most likely to make things happen. The good teams and top teams in the country will get their match-ups spot on, they also have the personnel and resources to do this.

Mayo were the closest team to beating Dublin over the past five years and eventually did topple the six in-a-row champions this season. One of the main reasons this was the case was their ability to find quality defenders to negate the influence of Dublin in the final third and key areas of the pitch.

Tyrone, the current champions, displayed those same levels of quality in matching up on opposition key personnel. The role in particular that Conor Meyler played in negating the powerful running of Kerry’s half-back line was one of the best displays of defensive discipline seen this year. The fact still remains, great teams are built on great defences.

Personally I feel we aren’t developing the art of defending during our training sessions enough – a lot of teams now will train with extra defenders to simulate what their forwards might be faced with in a game with most teams operating with plus one or plus twos.

You must however ask yourself the question though, how many times are we exposing our defenders in training to cope with a one v one situation? We should be doing this a lot more often in my opinion and that doesn’t mean facilitating a tackling exercise in a small grid 1v1. That’s unrealistic – more exposure, more space, ending with a scoring opportunity.

Defenders are terrified of two things, space and pace. Expose them to more of this in training and watch the confidence, composure and control of your defenders improve.

This is a wonderful time for us all to upskill as coaches, attend workshops and keep searching for those little nuggets of coaching advice or info that might give you an added edge when we all return to what we love doing, coaching on the training field in the new year, and making a difference in 2022. Many Christmas to everyone.