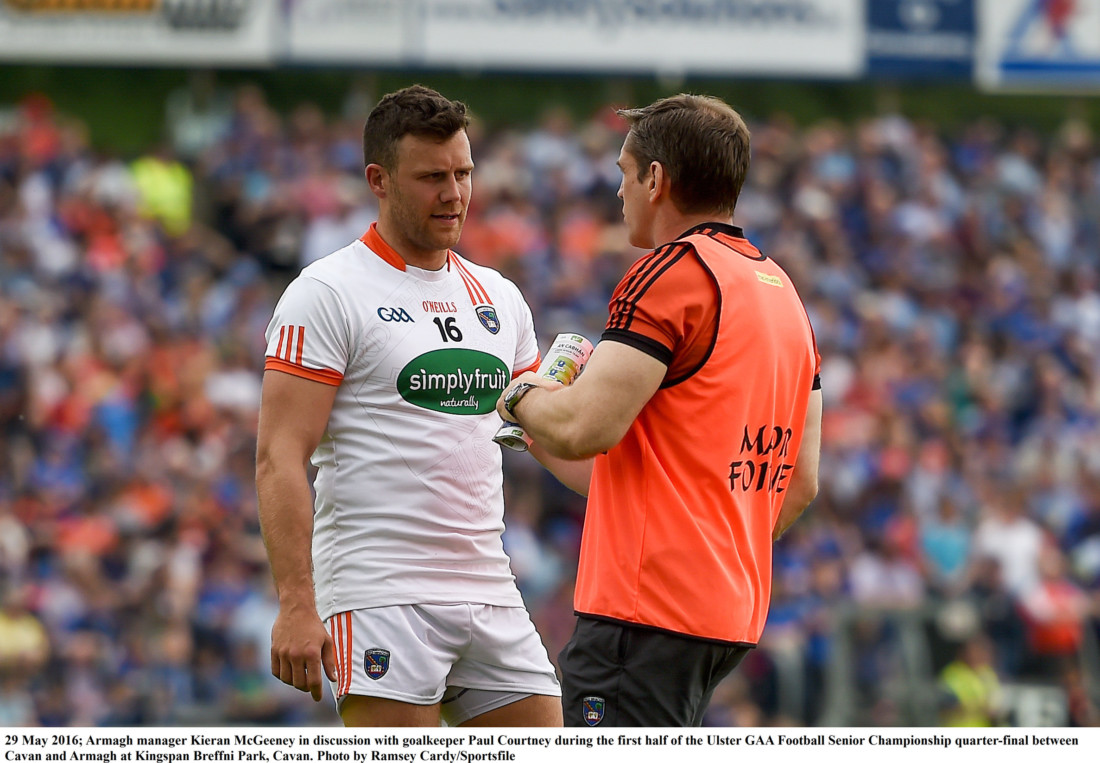 29 May 2016; Armagh manager Kieran McGeeney in discussion with goalkeeper Paul Courtney during the first half of the Ulster GAA Football Senior Championship quarter-final between Cavan and Armagh at Kingspan Breffni Park, Cavan. Photo by Ramsey Cardy/Sportsfile

BACK in the summer of 2016, Armagh manager Kieran McGeeney came under enormous criticism for playing outfield player, Paul Courtney, in goal for our Ulster Senior Football quarter-final game versus Cavan.

The game was played in the blistering heat of Breffini Park on Sunday, May 29 and Paul’s rampaging runs deep into the Cavan rearguard had the temperatures of Armagh fans rising even further.

From the outside looking in the move undoubtedly seemed ludicrous, and I am sure some elements of the Armagh supporters were thinking ‘Geezer’ may even need sectioned – but for the most part the move worked in that it allowed Armagh to create overlaps and work the ball downfield.

Unfortunately, we were ineffective with our forward play and it cost us the game.

However, not many people would have known that I was returning from a spinal fracture I picked up during a training game.

My timetable for returning to play was 12 weeks meaning I was due to be back two weeks after the Cavan game. Fortunately, I received clearance nine days before the game but with only one session before playing Cavan I simply hadn’t enough time to make the starting 14.

Courtney immediately stepped into the role of second goalkeeper while I was out. He had played the position before and ifwhen his home club Ballyhagen were short or stuck for a ’keeper he would regularly volunteer.

We trained him for the 10 weeks as a goalkeeper and improved his goalkeeping ability and combined this with his outfield abilities to create a hybrid player that would link up with both defence and attack, just like we saw. In training whenever Paul would join the attack it caused havoc having the opposition in disarray.

On Saturday, we will now be five years on from this game and since then we have seen more and more goalkeepers beginning to venture out from their goal area.

Over the past five years the frequency these men leave their creases to join in with the outfield play has gradually increased. What is more noticeable is how it is slowly becoming more and more accepted as the norm for the position. The more frequent we see goalkeepers venturing up field to assist their teammates, the more widely it will become normalized.

I have written at least two articles before on how I believe this is what the position will evolve into (albeit if the GAA do not introduce rules to stop it).

We will see more and more goalkeepers joining the fray and becoming regular scorers in-play, goals included. Over the past two National League weekends we have seen the goalkeepers constantly involved with the play.

In Armagh’s game against Monaghan, both Beggan and Hughes were seen in and around the half-way line in possession of the ball. Morgan and Patton were also very comfortable carrying the ball for Donegal and Tyrone respectively. Again, Hughes and Morgan ventured from their goal area into opposition territory in last weekends Armagh v Tyrone game. The more that younger players see this happening will only serve them the confidence to emulate the goalkeeping heroes that they look up to for guidance and the players they want to imitate when they play.

With this in mind, it will be prudent for all coaches, not just goalkeeping coaches, to consider this whenever they are drawing up their team plans for the year ahead. If a coach oversees a team that is in possession of a goalkeeper that has the ability to join the open play, then it is important to create some form of plan to incorporate this into their team play.

Planning strategies to turn this ability into a team advantage andor strength would be beneficial for the team as a whole. Having something in place and training it regularly in training while also allowing the goalkeeper the freedom to understand the best possible times to execute this manoeuvre will be important.

From a goalkeeping point of view, if you wish to add this ability to your performance you must train yourself to carry the ball by being in possession of it. The various skills that an outfield player requires will also need to be practiced religiously. You cannot expect to join the play effectively if you do not train it correctly first.

Every year, glimpses into the future of goalkeeping in Gaelic football appear.

Goalkeepers will become more and more involved with outfield play, but it is those coaches who pioneer this phenomenon and create attacking strategies to utilize its inclusion into their team play that will ultimately reap the greatest rewards from it. The future is here, The Future Is Now!